You are here: Products Untaming Lily Wilde by Olivia Fox 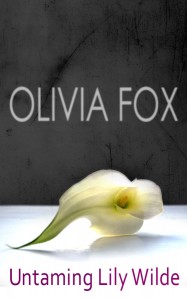 Dumped on New Year’s Eve by Tom, her only ever lover, ‘good girl’ Lily vows to make up for years of underwhelming sex, resolving to seek out new thrills with no strings attached, in a year of clit-melting sexual exploration.

Born in Paris, France, Olivia Fox now lives in the East End of London, where she writes naughty words behind a big, untidy desk.

I wanted to write the kind of book I’d secretly love to read. Something with bags of tension, a solid plot, strong characters and plenty of kink. Oh, and a wee bit of humour thrown in for good measure.

Being close to Lily – knowing her inside out – he’d be able to please her in ways she didn’t even know she wanted to be pleased. He groaned, hardening near instantaneously at the thought, and slumping further still into the timber frame. He’d please her alright. It was what he was good at. Getting under a woman’s skin. He’d have those innocent, indignant, pouting little lips of hers so red with lust that all manner of filthy desires would spill out for him. And her other lips… Christ. They would be even redder, would taste even sweeter. Seb’s eyes were no longer focused on the scene below, they were fogging over, allowing him to see something entirely more pleasant. God – what he wouldn’t give to spread those silk-smooth thighs and run the tip of his tongue along that pretty little slit, torturing her until her lips glistened and her clit swelled plump and suckable and…
He took a final dissatisfying drag on his cigarette. For fuck sake. Why did he always have to be such a lewd, chauvinistic cunt? He knew the answer of course. It was because lewd Seb was easy. The path of least resistance. He could excel at being lewd Seb. He’d sure had enough practice. Doting, monogamous Seb was a trillion times harder. By now, for all he knew, being that Seb might just be impossible. But he’d wanted to at least give it a shot even before Lily had stumbled into his eye line. He’d had his reasons then, and now – now he had his incentive. Even if Lily was too sweet for him. Too unmistakably lovely for such a sick bastard.
She deserved better. But hey – too bad. He might have left the hedonism parties behind, but he wasn’t quite ready to announce his sainthood just yet. He wanted Lily and unless she had any objections he was going to have her.