You are here: Products UNSCREWED by Ren Alexander 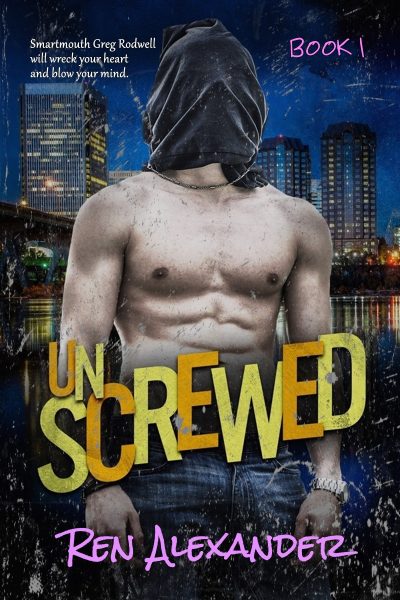 The myth, the man, the legend.

Yeah. I’m none of that crap.

Almost everyone calls me Rod, whether I like it or not. I’m the guy others look to for a laugh, a dirty joke, a distraction—the office clown. Even my best friend, Hadley, laughs.

It’s just that, I’m not always laughing. Not even on the inside. Nobody knows the real Greg or the agony I hide with humor. My recently dead sister had a clue, but she’s in no position to blab. I screwed up big time—then and now—but it’s all my undoing. Through everything, Hadley’s been my cure and my curse. And I fell in love with my married best friend. But she wasn’t always married, and I wasn’t always broken.

I had a millisecond of a chance, but I blew it, siding with morality. What guy does that? And sailing that sinking ship all the way down, I sacrificed my wants for her needs. Doing that, I fathered a kid with the office trouser troll. Stupid? Hell to the yes. Because now, regardless of the grand total, I want something I can’t have. Integrity and my sanity be damned.

But nobody, especially Hadley, can know the real Greg Rodwell, my tortured soul, my unashamed love, or my darkest truth, because it wouldn’t just blow her mind.

It would rock our damn world.

Although UNSCREWED is a standalone, you’ll achieve maximum shock and awe if the Wild Sparks series and The Keys to Jericho are read first.

Ren Alexander was born in Wheeling, West Virginia. She graduated from West Liberty University, where she received a B.S. in criminal justice. Although interested in that field, her true passion was reading and writing. She currently lives in Detroit, Michigan with her husband, two daughters, and two cats.

Ren's novel, "The Keys to Jericho," was chosen as an "Official Selection" in the Romance category of Apple Literary's 2017 Annual Book Awards.

Greg Rodwell is my favorite Wild Sparks character. He's funny, raunchy, foul-mouthed, but the best guy ever. But beneath the laughter is a tarnished heart of gold hiding his darkness. His story had to be told, even if it was the hardest for me to tell.

If you’re reading this, I’m dead. Shocker. I know. I hope you made sure I didn’t look like a clown prostitute in my casket. Mom was always big on trying to make me normal and not the queen of the damned I was. Her normal was most definitely not mine. I swear if she made me look like I hawk Avon, I will haunt your dumb ass.
I wish I could comment on what heaven or hell is like. I’ll just say that either one could use more nachos. I’ll always remember that time we ate nachos in the backward seat of Aunt Amy’s old station wagon. Being the faulty tool you are, you blew chunks everywhere. It dripped down the back window! Even if I did beat you within an inch of your eight-year-old life, that was a special memory for me. I’m telling everyone here about it.
You’re probably wondering why I’m writing to you. In a diary. On my borrowed time. Sitting in the bathtub. I’ll pause while you think about your naked sister. Pervert.
As I was saying, you’re probably killing your brain cells trying to think of reasons. Pencils down. I’ll give you the answer. You need me. It’s as simple as that. I’m about as deep as a clogged toilet. I can’t stand being all sentimental and shit, even in death.
I’m not writing to you just to ramble. When I have something to say, I’ll say it. When I don’t, piss off. Figure it out yourself.
The point of today’s writing is that I know your secret.
Get over her, little brother.
You fucking have to, Greg.

Have a wonderful day.

Get fucking bent. You think you know me, but you don’t. Nobody really does. And secrets? There are a couple I’ve never told a soul that would curl your hair. I’m not going to start by telling a fucking ghost.
I know you left this diary for me to find but hiding it in your damn underwear drawer is repulsive, even for you. Are you satisfied that you’re still ruffling my feathers after you bit the dust? How fair is that shit? I don’t sit at your grave, spouting ridiculous theories about your life. No. Instead, I’m sitting here writing to a dead chick who didn’t have the courtesy to say goodbye before she croaked.
Hey, you also had a little secret. I know you had the hots for your physical therapist. Wasn’t his name Ernie, as in the Keebler Elf? Aside from his porn ‘stache, his toothpick arms and crooked legs didn’t inspire confidence in me that he was qualified to help your lazy ass. Maybe he did, just in ways that make me want to claw at my brain.
So, fucking thanks for making incorrect assumptions about me. I guess it’s all the same since everyone else does it. I don’t need you or your daily affirmations from beyond the grave to give me insight into my life. I just don’t. I got it all under control, sweet cheeks. Go back to your harp playing or pitchfork sharpening.
You have a blessed evening.

P.S. Don’t haunt me. I have enough problems.
P.P.S. Okay. Disregard most of that shit.
P.P.P.S. You can still get bent, though. Wherever you are.
P.P.P.P.S. Like Gloria Gaynor said, “I will survive, motherfuckers.” Or some shit like that.

Do Jewish vampires avoid the Star of David?
Does killing time damage eternity?
Do you need a silencer if you shoot a mime?
Can a hearse carrying a corpse drive in the carpool lane?
If a person dies and then rises from the dead, do they get a refund for the coffin?

Be the first to review “UNSCREWED by Ren Alexander” Cancel reply