You are here: Products Unquenchable by Destiny Blaine 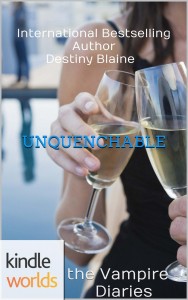 “We both know I’m not after the girl, Caroline. I want the woman.”

With Bonnie and Damon stuck on the other side, Caroline Forbes turns to the one person she can count on—Klaus Mikaelson. Not at all intimidated by an ‘original’ vampire, Caroline realizes the risks when she reaches out to Klaus but her heart is on the line right from the start.

Prepared to call in favors from old Mikaelson friends, Klaus and Caroline are soon on their way to Pennsylvania in search of an infamous witch. Their trip swerves toward danger when Gage, Klaus’s half-brother, discovers Klaus has begun an initiative to contact the other side.

Surprised to learn his estranged sibling is now an inconvenient obstacle, Klaus realizes Gage has the potential to become a real problem. Accompanied by a group of crossbreeds, Gage issues a dangerous ultimatum—Caroline or a favor.

With Caroline’s life in danger, Klaus has no other choice but to call Elijah for help but when his brother shows up with Elena and Enzo, too, the road trip is bound to end in disaster. To make matters worse, it’s hard to outrun a stealthy creature with nothing to lose and everything to gain. More importantly, Gage knows just how far to push Klaus to ensure his brother meets every last one of his demands.

The author still takes on the occasional ghostwriting project, typically true crime or poker-related. In December 2015, Destiny will host her third workshop in East Tennessee–Destiny Blaine’s Writing Workshop. To book Destiny or any of her pseudonyms for a speaking engagement or to inquire about a ghostwriting project or her next sprint writing workshop, contact [email protected]

16. Klaus to Caroline: “We both know I’m not after the girl, Caroline. I want the woman.”

“Is this where I’m allowed to gloat?” Even though he’d lived through many lifetimes, Klaus couldn’t recall a happier moment.
“Gloat all you want,” Caroline said, shrugging out of her shirt, tripping out of her shoes, and grabbing hold of his belt at the same time. “But you aren’t leaving this room until you spend some quality time with the woman who just professed her love.”
“Is that what you did, Caroline?”
“What do you think?” She yanked and tossed, discarding one item of clothing over her shoulder and then another.
“Then I can’t help but ask. Was this declaration of love fueled by lust?” He grinned as she kissed him.
She looked at him with a longing he’d never seen directed his way before. “It’s ‘fueled’ by truth.” She released a ragged breath. “Just lay there and be quiet.”
“Hmm…perhaps I’m right to let you lead after all.” Now undressed, Klaus observed as she stood over him, stripping off her own clothes, seemingly in a rush.
Klaus admired the whirlwind of a beauty approaching him with hunger, true eagerness. He couldn’t help but count himself among one of the luckiest damned.
He’d known from the moment he’d first set his sights on Caroline Forbes. Perhaps he hadn’t known when or how their true connection would commence, but she certainly had a way of making him feel alive.
She towered over him momentarily, kissing him with commitment and clear motivation. Her hands skimmed and caressed his bare skin and shoulders, dipping down to his waist.
Hunger lingered in her eyes, compassion and love existed in her touch. She lowered herself to the bed then and wrapped her arms around his neck. “If you break my heart, I’ll find that white oak dagger.”
“Your heart is safe with me,” he promised, dragging his fingers up and down her neck before lowering them. “And mine belongs to you.”
“For how long?”
“The question isn’t how long before we’ll part, Caroline. Don’t you see, sweetheart? It was never that. It was only a question of how long before we found our way so we could be together.
“Now that we are, nothing and no one will ever stand between us.” He flipped her to her back then and kissed her with incredible meaning, desperate to make her believe this monumental joining would tie them together forever.
“Klaus,” she breathed, her hair fanning around her flushed face. “Love me.”
“That’s exactly what I plan to do.” And as he laced their fingers together and pushed her arms high above her head, he claimed her as his lover and mate.
His fangs descended and he marked his spot on her slender neck. Sinking his teeth into her, he recognized their joining as an eternal partnership. They became one with a rocketing rhythm destined to carry them into the ecstasy-ridden hours of a day cut too short by the shadows awaiting them in the dead of night.
*See Beta Reader Favorites in “What Inspired You” below*

Be the first to review “Unquenchable by Destiny Blaine” Cancel reply