You are here: Products Unhinged by his Fiery Touch by Sable Rose 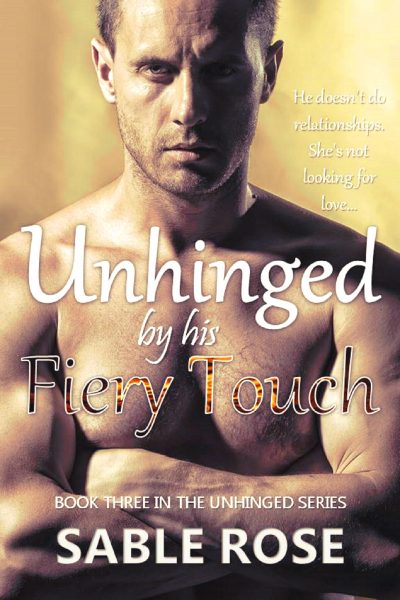 Unhinged by his Fiery Touch by Sable Rose

You know you shouldn’t fall for him. He’s a bad boy, maybe a killer, and he appears to have slept with every attractive woman in your city. But, gosh, he’s so hot, you can’t help yourself.

All commitment-phobe Tari Johnson wants is to be the first female boss in Glow Force Media, Nigeria. To get the top job, she needs to put herself above other candidates and so she hires the best in the business, Olympus Security, to manage the media conglomerate’s security.

The CEO of Olympus Security, tawny-eyed bi-racial Steven Braithwaite is dangerous and plays by nobody’s rules except his own.

Former marine and ex-mercenary, he does women. He doesn’t do relationships and the women always take whatever he offers.

At first sight, Tari is thrown by him, this beautiful man, and now she’s in lust.
But Tari’s definitely not in the market for a man. There are always men courting her, men she can easily control and that’s all she needs.
And anyway, Steven’s also the most annoying man on the planet… playing games, teasing and frustrating. Every instinct in her is telling her to run away, screaming.

Because Steven is irresistible, unforgettable and different from any other man she’s been with.

Steven knows she wants him and he wants her too. On his terms. And he’s ready to do whatever it takes to make her submit to him, even if he has to employ methods that are slightly underhanded to end her affairs with other men.

But then something happens, something neither of them is prepared for, something that turns both their lives upside down…

Just as Tari’s struggling to wrap her head around this new development, an old enemy from Steven’s past shows up and now, she’s in danger, caught in the crossfire…

She revels in being different. Her passion is writing and she writes only what her characters tell her to write. She writes morning, afternoon, night. Who needs sleep?

She adores traveling and has visited over 15 countries. She uses these experiences to craft her stories.

Sable Rose lives in Lagos, Nigeria. No dogs yet. Definitely, no cats.

If you want to kiss me, kiss me. Do what you want to me.
The words wove a disquieting melody in her head. What kind of man says such things to a woman? The kind that women always fawn over…
She sneaked a look at him when his eyes flicked to his side-mirror. At his hands manipulating the wheel of his silver Aston Martin. At his solid thighs in black trousers.
She averted her eyes when he slanted a glance at her, noting his concentration on her laps unconcealed by her jacquard sheath dress.
What did a girl have to do to get a little mouth and tongue action? Just once… Just one kiss and maybe it would help tamp the fire burning in her nether regions.
They were on the way to a club. That was all she knew. He had sent her a text earlier instructing her to be ready by ten-thirty P.M. From the moment he came to the door, right on time, he had been a gentleman. Complimenting her on her outfit, opening the car-door for her.
Well, today she had decided. She was going to have to change her approach. No more Ms. Treat-Me-Like-A-Lady.
“We’re here.” He announced, pulling into the frontage of a dark, rectangular building and parking.
Tari surveyed the area. The only signs that this wasn’t a boring residential building were the queues of mostly men in front of the door, the two massive bouncers coordinating the flow of people in and out and the rows of flashy cars lined up along the quiet street.
Steven opened the door for her, grabbed her hand and ignoring the queue, led her to the door.
The two guards burst into wide smiles.
“Mr. Braithwaite, welcome.”
“Tony. Lanre. How are you two doing?”
“We’re good.” They chorused, stepping out of the way.
As Steven slipped into the building, with Tari in tow, she noticed his left hand dip into his jacket pocket and then drop some Naira notes into the palms of the two men.
Inside, still hand-in-hand with him, she glanced around.
Strategically-positioned colored lights strobed and glowed. On three stages in the center of the wide room, skimpily-dressed young women undulated their hips and breasts, simultaneously winding their bodies around metal poles. The men sitting below the stages gawked and drooled. Music thudded overhead. Crimson leather sofas and round centre tables were ranged along the walls, most of them occupied by couples engrossed with each other.
My goodness, he had brought her to a strip joint. Oh my.

He led her to one of these seating areas. This area was roped off and protected by another bulldog who on sighting Steven, yanked off the divider and then vanished away.
“Sit.” He said.
Tari slid onto the sofa. Steven parked next to her.
His eyes were shining with amusement when he glanced at her. His voice held a tinge of laughter. “What do you think?”
Before she could answer, a busty woman in transparent black bra and panties bustled up to him.
“Steven…” She purred, pouring herself over him.
He flashed a grin. “Didi.”
“Is today the day I’m going to give you a private dance?”
Tari stared at her. She could see the girl’s nipples and pubic hair through the flimsy material.
Steven patted her face. “Not today, Didi.”
“Your loss.” She muttered, flinging a glare at Tari and then swaying away.
Tari raised an eyebrow. “Is she one of your conquests?”
Steven’s gold-drenched gaze swept over Tari’s face and figure before he murmured, “I don’t sleep with club girls.”
A black-jacketed male waiter approached to take their order. Steven went for brandy and Tari for gin and tonic. Seconds later, he was back with their drinks and then faded into the darkness again.
She took a gulp of her drink, swallowed. The heat warmed her throat.
Tari glanced at Steven, mouth curving into a smile. “This is the first time a man has brought me to a strip club.”
Steven grinned. “This is not just a strip club.” He jerked his head upward. “There’s a private room upstairs where people fuck.”
“You don’t have to say fuck every time. You could say… they’re making love.”
“I doubt that any one of them up there is thinking of love.”
“Okay, having sex, then.”
He shrugged, swigging his brandy.
Gaze fixated on those pale pink lips drinking from the tumbler, Tari asked, “Have you had sex up there?”
He didn’t look at her as he replied, “Years ago.”
Okay then. She took another mouthful of her gin and tonic. This was turning out to be a date to remember.
Swooping on her like a jungle tiger, he pressed his mouth close to her left ear.
Tari shivered. His voice whispered, “Would you like to go up and watch?”
“What? No.”
“Are you sure, Ms. Johnson?”
She strove to get her nerves under control. Didn’t answer. Couldn’t answer. The effect he was having on her must be illegal.
Had to be.
They spent the next few minutes in silence, listening to the music and watching the action in the club, while Steven quaffed three and a half glasses of brandy and she polished off her second drink.
Then, he cut his eyes to her. With a grin dancing on his lips, he asked, “Do you want to sit on my lap?”
Tari eyed him. He was expecting her to refuse. She would show him.
“Yes.” She answered and before he could say anything else, she had shot up from her seat and onto his thighs.
Soft flesh met hard muscle. Instinctively, she burrowed deeper, moving forward and backward.
She heard a low moan behind her. And felt it, rising. Waking.
His arms slithered around her waist. His thumb caressed her belly-button through her dress.
Tari’s pulse sky-rocketed. Her entire body smoldered.
Underneath her bum, he was growing bigger and bigger.
Tari licked her bottom lip.
“Do you find me attractive?” He groaned.
She twisted round to glance at him. His eyes blazed with an insane yearning.
She whispered, “Yes. Do you find me attractive?”
The answer was torn from his throat. “Yes.”
Steven couldn’t believe what was happening. He was always in control, especially in public. He didn’t have erections at the flick of a wrist. She wasn’t the first woman to plant her buttocks on him. So what the hell was happening? She was taking charge. He was losing the battle.
“You’re big.” She whispered.
Steven’s chest enlarged. He could only manage a muttered “Yes.”
“How big?”
What was she doing? “Over eight… inches long… and close to six wide.”
“You’ve measured it.” She giggled. “Are there some women who think you’re too big?”
“A few.”
“I don’t think you are. I’m the perfect fit for you.”
Tari watched as his eyelashes fluttered like the wings of a bird caught in a trap.
He swallowed. Oh damn, she smelt of flowers and honey.
“Can I see it?”
“What?” Steven wrenched himself back from the edge of oblivion. Take back control, man. You’re Steven Braithwaite.
Uprooting her off his laps, he plunked her down on the sofa.
In a harsh voice, he replied, “No.”
Tari’s eyes flew to his face.
He was glaring at the table, breathing in air through his mouth. Then, his gaze zipped to her.
“Don’t you have a boyfriend?”
Tari’s mouth slackened. Unbelievable. Anger borne on the wings of frustrated lust zinged through her blood.
“Now you remember I have a boyfriend… you’ve been flirting with me, playing games…” She snapped.
Steven bit his lip. He was pissed. Pissed at himself and pissed at her for destabilizing him. Throwing him off his game. He wasn’t a thirteen year old boy anymore. Damn. He needed to call it a night. Maybe after dropping her off, he would pay one of his women a visit. Slake this hunger.
“Take me home.” Tari’s lips trembled with rage.
“With pleasure.” Steven muttered, getting to his feet.