You are here: Products Unexpected Pleasures by Cammie Cummins 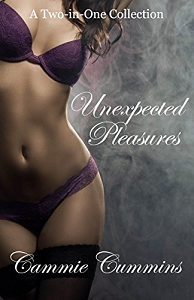 A TWO-IN-ONE LESBIAN COLLECTION
ONE THING LEADS TO ANOTHER
While on a business trip, Amy confesses to her friend Betsy it’s been over two years since she’s last had sex. Flabbergasted by this startling news, Betsy’s determined to do something about it. So she enlists her husband’s help but in a way that is as shocking to conservative Amy as it is satisfying.

CAROL’S PERFECT CHRISTMAS SURPRISE
For fifteen years, it’s the same thing. What to get Mike, the man who has everything—including Carol—for Christmas. A new car. A new boat. A ski trip to Aspen. Carol never knows. Except this year, she thinks she’s nailed it. Meet Sharon. Mike’s Christmas present this year. Hired to do whatever it is he wants her to do. But what he wants her to do with Carol is the biggest surprise of all.

“I’ll cut to the chase, Dan,” Betsy said, a bit of exasperation in her voice. “Amy hasn’t been laid in over two years and she’s looking for someone to fuck.”
“Holy smokes. Really?”
Suddenly I felt like I was experiencing a full blown menopausal heat flash. I was so hot sweat beaded my upper lip. How pathetic was I? What Dan must’ve thought of me? That I’d sunken so low as to ask him to set me up on a one-night stand with some buddy of his.
But that wasn’t what he reacted to. Instead, he said, “Two years? How can you stand it?”
“She needs to get laid,” Betsy clarified.
Light-headed, maybe from the wine, I bobbed my head, and kind of giggled, feeling like an idiot. I said, “I really do.”
“Yeah, I guess you do,” Dan said, clearly not sure what to say and looking back at his wife for guidance.
“So, what do you say, honey?” Betsy asked.
Sitting there, a jangle of nerves over Betsy asking her husband if any of his friends would be desperate enough to be interested in a…a tryst with pathetic, old me, I gasped when Betsy pulled the rug completely out from under me. “You wanna drop your jeans and fuck Amy?”
“What?” I said.
Dan sort of shrugged, the looked me over. “Well, yeah, I guess. I mean, that would be kind of hot.” He looked back at Betsy. “If you’re sure you’re cool with it?”
“It was my idea wasn’t it, dummy.”
He turned back toward me. “And you’re okay with doing this, Amy?”
“What?” I repeated. “No, I mean…”
“He’s willing and I’m okay with it,” Betsy urged. “What’s the problem?”
She had a hand on Dan’s thigh, caressing it. He wore a pair of tight blue jeans and a black tee-shirt. Betsy moved her hand up over his crotch and rubbed. Dan sort of jerked but continued to give me a smile, his eyes roving over my body in a way he’d never looked at me before. At least, I’d never caught him doing.
I swallowed and liked my lip, so nervous my hands were shaking.
“You’re not scared are you?” Betsy teased.
“I’m not scared,” I said. I was terrified.
Betsy smiled and gave me an encouraging nod, pursing her full lips, a clear signal from her for me to go for it. “Prove it,” she challenged.
Betsy continued to rub Dan’s crotch and his bulge became immediately visible. I stared and found myself licking my lips. “Okay. Sure, I suppose. I mean, I didn’t think…” I giggled, so panicked I couldn’t speak or form a coherent sentence. “It could be fun…depending…”
“Depending on what?” Dan asked.
“I don’t know,” I giggled again. Giddy school girls had nothing on me at that point. “What you’ve got.”
He gave me a sideways glance and a smirk. “Oh, really?”
“He’s got, sweetie,” Betsy added. “Trust me.”
“You want to see?” Dan asked.
“Um, yeah. It’s why we’re here, isn’t it?” God, was I really going to do this?
Dan unbuckled his belt and zipped down his fly. He picked his ass up off the couch and pushed his pants down to his bent knees. Not wearing underwear, his semi-stiff cock flopped lazily against his legs.
Betsy’s been right all these years—he’s got!
My pulse quickened. Without taking my eyes off him, I pulled off my hoodie and draped it over the arm of the chair then I slipped off the couch and on to my knees in front of him. “Can I touch it?”
“It’s why we’re here, isn’t it?”
I wrapped my hand around his length. Warm and full in my hand, I stroked him hard and fast and his cock quickly stiffened to full erection.
So horny at that point I was passed asking permission, past asking anything, I went down on him, sucking his hot cock into my mouth until it banged against the back of my throat.
Dan groaned and scrunched down on the couch.
Slowly I pulled back and let his cock slip from between my lips and fist-pumped him while I held only the tip of his dick in my mouth, teasing it with my tongue. His moan encouraging me, I went down on his slick shaft again, and again, and again, and again.