You are here: Products UNDERTAKERS INC. by JC Compton 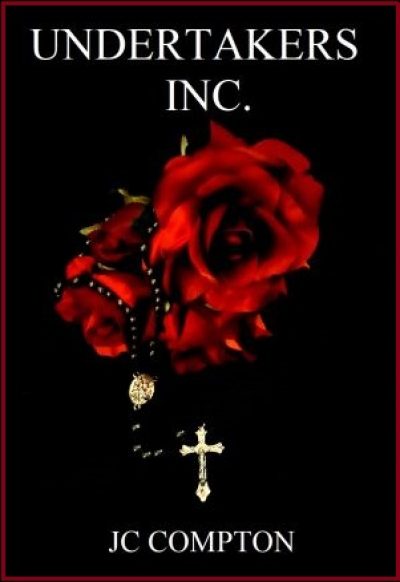 Tim Thompson is a young man waiting only to join his entire family in the grave. But when he is hired by a mysterious undertaker business, he learns that many things other than death can happen to him, from meeting and falling for an outlaw vampire, Cyril, to being reunited with his relatives after they emerge from the grave! Undead life is anything but simple, especially when you are the son of an ultra-dominant vampire. Will he choose the same path as Fiona, the vampire mortician and her forbidden love for a mortal, or follow the path to power and fight against his own sister who has both love and murder on her mind?

JC is the French-American author of fantasy, dark fantasy, and romance novels. A world traveler who has lived in several countries, JC enjoys diversity and intercultural exchange. JC particularly likes the elegance of the Victorian era as a background for their novels, and likes to portray unique characters who do not follow the same path as everyone else. Love and adventure must go hand in hand in all of JC’s novels – live life with passion or not at all!

It started out about 10 years ago as a random chapter I wrote, about a young man interviewing for an undertaker job in London in 1888. I knew it would be a vampire story, but I did not know where to take it from there. Then I decided it should be a romance novel, following several couples, some straight, some not, and the unique romances each of them experienced as vampires in a very treacherous undead world with very strict rules. A lot of my inspiration comes from music, and some characters are inspired by specific songs or singers. As a reader, I struggle to find books with a good balance of action and romance, and well-written erotica. So I wanted to write a book combining all of that, and I wanted it to include passionate love stories. It all starts with love, and then things happen… UNDERTAKERS INC. is a series (currently 2 volumes published), so expect me to explore many different kinds of love in the next books.

“I’m not patient.” she said, and he laughed.
“Well then, shall we skip the formalities and take off our clothes?” he joked, observing her reaction.
She certainly had not come only for his conversation, she was hoping for a little action, but of course that was not what a vampire of her rank was supposed to be thinking of, or saying to one of his rank.
“You’re not answering…” he remarked, appraising her with his eyes.
“I can’t wait to see you take off your clothes.” she replied, taking him by surprise. Her eyes were the ones shining upon him now. And his face was no longer that of the wise businessman, but that of a young man who had just been shot with the flaming arrows of love. He was the one who was troubled now. She suddenly realized the awkwardness of her response and blushed.
“I mean…” she said.
He too blushed slightly and lowered his gaze for a moment, searching for his words.
“So you like older men?” he finally said.
“I like you.” she stated.
She could tell he was not used to women approaching him so boldly, but he seemed to be liking it. He smiled at her now.
“Well then, Holly,” he said, taking her hand, “let us leave politics aside for tonight and get to know each other better – in private.”
He invited her to follow him to a bedroom upstairs, and she went with him. There, he prepared for her a special blend of opium which they smoked together while talking. Then, they lay on the bed and gazed at each other quietly. In the darkness and intimacy of this room, there was no need for masks.
“You’re so quiet all of a sudden.” she whispered after some time.
“I am savoring every moment spent with you tonight.” he said.
And then she grew quiet, as words failed her. Her heart was racing in her chest and did not seem intent on calming down. She wondered whether he was pretending not to see it, or whether he needed her permission, as a Natural, to touch her. So she took his hand and placed it on her waist, and he moved closer.
“Weren’t you the one who wanted to skip formalities and take off my clothes?” she said.
“You are so appetizing, I am debating where to start.” he replied.
“You should start with a kiss.” she suggested, trying not to sound too eager.
He leaned forward and kissed her, and she kissed him in return. He drew her closer and pressed his chest against hers, and she could feel his heart racing too. He was the one who was eager in fact. They kissed longly and his hands held her firmly while caressing her body gently. He then began to unlace the back of her dress while laying kisses on her chest. He removed her corset and skirts and proceeded to her belly, where he lay another trail of kisses. She stretched out on the bed, letting him do as he pleased. He took great care in removing her stockings and garter belt, enjoying the taste of her skin. It was dangerous play that could end with an unfortunate bite – and he was already taken. But he did not bite her.
He removed his clothes and let her play with him as she wanted now, gently pushing her back when she became too hungry for him. She ran her fingers through his long black hair that fell around her like a gentle curtain, and he caught her hand and kissed and tasted each of her fingers one by one. She traced the contours of his lips, his cheeks, his neck, and then his slender but muscular body. He then moved down and played her with his tongue and fingers like an expert, making her quiver and moan with delight. Shen was a treat, one to be enjoyed slowly and patiently, and she was the queen receiving this royal gift, or so he made her feel.
But Holly was eager for more. She whispered her demands in his ear and he finally offered himself to her with the devotion of a kind god, embracing her with gentle and caring arms. He rocked her slowly, careful not to hurt her inexperienced body, he teased her, kissed her, licked her, fueling her arousal until he finally took her over the edge a first time, and many, many more times after that.