You are here: Products Underneath: The Blind (A Paranormal BWWM Vampire Romance Series Book 1 by Connie Fuller 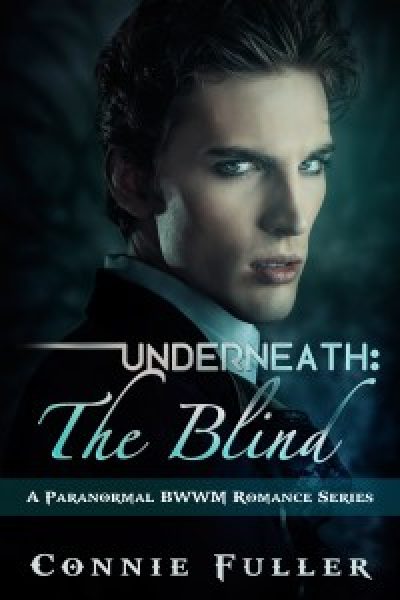 Underneath: The Blind (A Paranormal BWWM Vampire Romance Series Book 1 by Connie Fuller

Kyla is a vivacious young woman with rich dark skin, jet-black hair, and keen bright intellect. She has the life she’s always dreamed of: a high paying job in the field she loves, a wealthy fiance Jasper, who gives her what she needs, and a vibrant experience in a thriving city.

However, though her relationship is good, it no longer feels good enough. That’s when she meets Daniel, an enigmatic businessman with an odd aura of power. Soon enough, that power may change her completely. After their first chance meeting, Kyla thinks of their overnight tryst as a one time affair and resolves to move on.

Then, Daniel keeps showing up in her life. He meets her at work, then at a nightclub, and soon enough she’s seeking him out herself. Something draws her to him, and quickly the bite marks on her skin reveal the source of Daniel’s power. In the end, some questions still linger. Will Kyla join herself permanently to Daniel? Will Jasper let his fiancee leave him without a fight? The answers lie Underneath.

Now that I am in my 40’s, I will finish all of the projects that I started long ago. I will also create new ones. There’s nothing to stop me but me. So here I go.

Her gaze met his, then fell to trace the outline of his chest in the thin dress shirt, “No wonder you were so cold. All you had under that jacket was a flimsy little shirt.” She reached out, slid her hand down the side of his arm, “Silk?”
Daniel forced himself to watch her with careful restraint. He still hadn’t ogled her, hadn’t let himself peruse the woman’s figure with more than a glimpse, “Yes, it’s worthwhile to enjoy the finer things.”
She moved her hand to rest it on his chest, “I agree. Maybe that’s why I like you so much. You’re one of the finest things I’ve ever seen.” Kyla grinned, averting her eyes, a faint chuckle escaping her lips.
He smiled, showing off perfect teeth and an amused expression, “What, something funny?” He brushed the back of his hand on hers, then spread his fingertips to cover hers. The contrast of their skin is perfect in its difference.
She slipped her hand down out of his grasp. Her touch didn’t leave his side, instead sliding down muscle easily felt beneath such a thin shirt. Kyla’s eyes followed her touch, watching the way his form tensed, watching the way his leg shifted as she set her hand atop his leg. Her fingertips curled, ever so slightly, to brush the inside of Daniel’s thigh. She wanted him, she knew it already. It was part curiosity, a want to experience an odd man, a rare find. The other drive was anger, dizzying in its strength. A cliff was fast approaching, but she couldn’t get herself to jump. Not yet.
He let her touch release him from his restriction. Finally he ran his eyes down the soft curve of her neck. He let himself drink in the sight of her smooth onyx skin. The top she wore revealed tantalizing slices of her breasts, firm and full. Her position pulled the shirt up just enough to reveal a peak of her waist, the dip toward her hip. And her legs… the skirt was short, just enough to be decent but nowhere near modest. He could nearly see the entirety of her thighs, especially with her legs drawn up as they were. She was toned, fit, “You didn’t answer my question. What’s so funny?”
Her mind was caught up in the choice. She could still tell herself she hadn’t done anything. They kissed, but kisses happen. She forced herself to pay attention to Daniel’s words, “Ah… excuse me.” Her voice was soft, dangerously full of want, “I was just thinking, when I was saying that you’re the finest thing.”
He pulled his eyes back up her body, enjoying the knowing of seeing her chest rise with nervous breath, “Yes?”
“Well, I said the finest thing I’d seen. But…” The moment took hold, desire swelling and almost pushing her. Kyla slid her hand forward, pressing it firmly to feel the rising thickness in his pants. It excited her, drove out a gasp, “You’re gonna be the finest thing I touch, too.”

Be the first to review “Underneath: The Blind (A Paranormal BWWM Vampire Romance Series Book 1 by Connie Fuller” Cancel reply