You are here: Products Under His Hand – 5 Sizzling Novellas of Love and Surrender by Anna Antonia 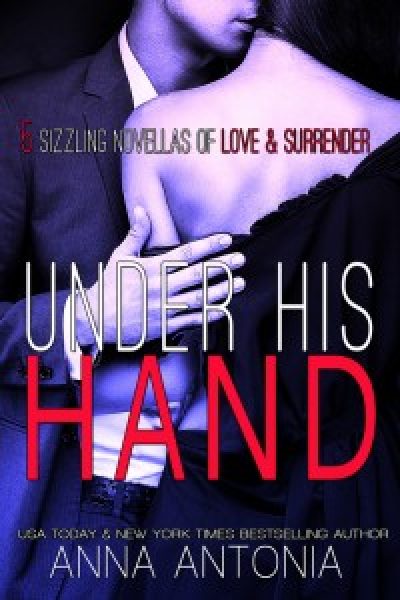 Love doesn’t obey conventional rules and neither do these dominant men. From billionaires to brooding aristocrats to childhood sweethearts, these romances straddle the delicious line between seduction and surrender…

Sarah Woods has always lived a nice, safe, and predictable life. That is until she meets tall, dark, and sexy-as-hell Devon McNeill in the erotica section of her local bookstore. What begins as friendship quickly turns into a chance for sexual awakening when Devon dares Sarah to meet him for one night at an upscale hotel. Will Sarah give into Devon’s wicked temptation or will this closet-submissive run away from the dominant waiting to make her his?

Trevor St. John always has to be in control. He thrives on it, needing dominance over all things big and small. Especially over me. Trevor is beautiful, tortured, and damaged. And despite everything he’s utterly perfect for me…

Natasha Reynolds has worked well under her brilliant yet demanding boss, Mr. Collins, for over a year. One night their dynamics take a thrilling turn. When Mr. Collins confesses to seeing Natasha as his prey, she is forced to admit her submissive side can no longer be completely confined to their working relationship. Will Natasha allow her inner bunny to come out and play with the ravenous wolf that is her boss?

Sophia Carter loved Alexander Monroe Draven II more than the moon and the stars, but he became a dangerous obsession. Eventually, she had to end things for her own sanity—but she never forgot Alexander. Now her obsession is back and the billionaire wants Sophia and he won’t take no for an answer.

Ava is emotionally complicated. Sevastian is emotionally repressed. To ease the burdens of their high-stress lives, they like to play dominance and submission games. However, one night changes everything. How will Ava and Sevastian come to terms with the dark knowledge that it’s not all just a game but a new way of life?

Anna is a lover of all things dark and passionate. Living in the Southeastern United States, she enjoys antiquing, DIY thrift store finds, sedate hiking along trails, and spending time with her family and menagerie of pets. Being the only girl in a household full of men makes it hard to always be a lady, but she gives it a good old college try.

I wanted to explore how two people can fall in love while exploring their dominant and submissive sides.

“Hold out your wrists.”
Devon’s voice slid over me like warm, thick honey. Sitting on the edge of the hotel bed, I felt my stomach tighten as I imagined what would happen once I obeyed him. An intoxicating paradox of fear and lust overwhelmed me. Bound, I would be at his mercy. He could strip me, fuck me, hurt me, love me, exalt me, or break me.
All at once or not at all.
My lips parted, alerting him to the reason why my breathing quickened and my limbs trembled.
The ruby scarf trailed to the floor when he dropped his arm.
I was afraid I had disappointed Devon, made him think I wasn’t serious about being here. Before words of apology could trip their way out of my closed throat, Devon crouched before me. He smiled, brushing back my hair with his free hand.
“I know you’re scared, Sarah. It’s okay.”
My lips curved into a stiff smile. I wonder if it looked as awkward as I felt. “Are you mad at me?”
“No, of course not.”
He trailed the tip of one finger across my chin and down my throat. Goosebumps exploded. Heat gathered and concentrated on the path where he had touched me. I needed to know what else Devon was capable of making me feel even though it scared me grim.
“I almost didn’t think you’d come.”
“Really?” My voice was high like that of a schoolgirl. Clad in my black skirt, sensible white dress shirt, and black ballet flats, the description seemed apt. The white lace bra and panties underneath definitely completed the symbolism. In his presence I felt innocent, virginal to all the ways a beautiful, dominant man like him could taint a closet-submissive like me.
“I’m sorry.”
The corner of his mouth lifted into a lovely smirk. “Don’t apologize, Sarah.”
I fixated on Devon’s lower lip, wanting to kiss and take the fleshy part between my teeth. In the pulsing corners of my mind, I craved to be wanton and shameless for him…because of him.
‘It was supposed to be so simple and it still can be. I just need to let go and be who I want. And that’s what I’m scared of.’
As if he had read my mind, Devon praised me, words buttery soft and potent. “It was incredibly brave of you to come here.” He squeezed my bare knee. “You do know that, don’t you, Sarah?”
I swayed forward. His soft voice did delightful things to me. I could imagine myself doing whatever Devon wanted as long as I could listen to him forever.
Unfortunately, the problem came when marvelous imagining became barbed reality.