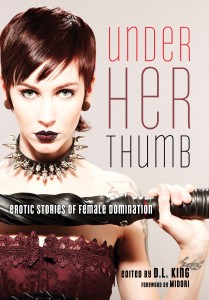 Under Her Thumb: Erotic Stories of Female Domination will whet your appetite for all things Fem Dom. The book is a feast to be savored, whether your desires lean toward the bottom, the top, or you are simply curious. “Quiet” by Andrea Zanin will prepare you for all that is to come, and whether you’re interests lie in the loving submission of Lawrence Westerman’s “Her Majesty’s Plaything,” boys wrestling for the opportunity to please their mistress in Laura Antoniou’s “Blame Spartacus” or the ultimate domination of Valerie Alexander’s “La Sexorcista,” you will find what you’re looking for, and more – under her thumb. From a forward by Midori to stories by greats like Rachel Kramer Bussel, D. L. King, Teresa Noelle Roberts, Dominic Santi and more, you won’t want to put the book down; but you’ll have to – from time to time

D. L. King publishes and edits the review site, Erotica Revealed (eroticarevealed.com). She most recently edited the bestselling The Sweetest Kiss: Ravishing Vampire Erotica, She is the author of two novels, The Melinoe Project and The Art of Melinoe. Her work can be found in anthologies such as The Mammoth Book of Best New Erotica, Best Women’s Erotica, Best Lesbian Erotica, Girl Crazy, Frenzy, Yes, Ma’am and Yes, Sir. Find her at dlkingerotica.com.

From “Quiet,” by Andrea Zanin
“Now, she gestures at him not to move. Unhooks the restrictive corset, peels off the sweat-sticky leather skirt. Free of her self-imposed bondage, she is not exposed, but all the more powerful. Her knee-high boots, gleaming dully in the faint white of the street lamp outside, keep her almost as tall as his six feet.
She slowly strokes the shaved slickness of his chest, the motion a purr. She plays her fingertips and soft scratches of her nails against his sensitive nipples, hears his breath go deeper as she draws them towards her, twists her knuckles around them, pulls and kneads until she’s stretching his skin into painful points of burning, hurting pleasure. Even in the dark, she can see his achingly erect cock making a distorted shape underneath the knee-length black skirt he donned for the evening.
She slides her fingernails up the back of his warm neck to grip his scalp, his heavy, soft, long hair like velvet against her forearm, and guides him to the bed, motions for him to slip off the skirt and lie down. He hangs it tidily from the footboard before stretching out like a cat exposing its belly.
She lifts her leg and places one spike heel on the mattress, dangerously close to his swollen crotch, the tip of her toe just brushing his hairless inner thigh, and relishes the sight of his vulnerability straining against the black fishnets.
He’s a quiet one. A trace of lipstick remains on his parted lips as he inhales, exhales, acknowledging that he’s now the one who is on display. This audience is the only one that matters. Her gaze is the one through which he wants to be seen. His chest leaps shallowly in the faint shadows. She watches, calculating. He watches her watch him, questions in his mouth not released.
Were it not for her tiny thong, her wetness would be leaving clear, glistening trails on her thighs. Impatient with her own body, she abruptly moves her foot away. She reaches down brusquely, inserts a fingernail into a hole in his nylons, and neatly rips one leg from crotch to toe in a swift motion. She sends his back into an arch when she leans over and sinks her teeth into the flesh of his big toe—he almost whimpers, but catches himself. His cock throbs visibly. She lacerates the other leg of the fishnets, the sound tearing the night. She rewards him for his delightful shiver by sliding her hand up between his legs for a firm squeeze. In turn he rises to her touch, his hardness so full she can feel every contour of the head, the warm shaft, the small pouchy frenulum, even through the lace of his panties.
This is not humiliation. There is nothing humiliating about being beautiful, or about being feminine. She, herself, is both of those things, and many more. She cannot fathom how encouraging these qualities in others could possibly be shameful or worthy of mockery. There is also nothing humiliating about submission. It is a gift, and all the finer when given selectively. She relishes these aspects of him, both of them, separate and entwined, and has taught him to be proud of them.”