You are here: Products Undeniable Fate by Mia London 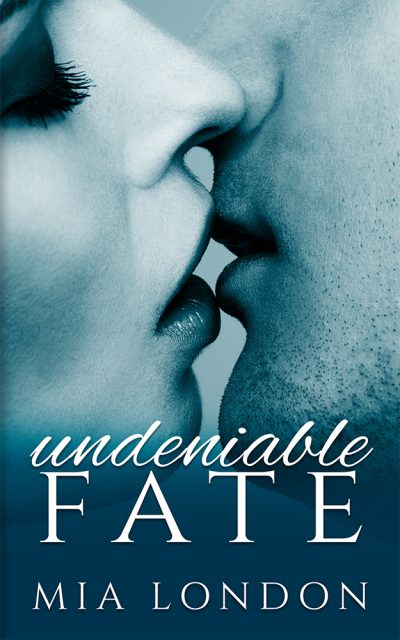 Was it fate that the hotel in Rome double-booked her room and he, of all people, walked through the door?

Project manager Lily Bennett dreads the trip to Italy for she suspects a pink slip awaits her return. Fate brings her fantasy man alive when Brandon enters her room by mistake. Kiss by kiss, he breaks down her insecurities making the next four days the best (and hottest) of her life. But when she dares to hope for more, he becomes distant. Now, to forget this man she knows so little about, who’s turned her world upside down.

Brandon Morgan is driven, successful, and wealthy. Handed his father’s company at thirty-six, he is not about to let his family, his employees, or Wall Street down. His company’s latest acquisition will prove he can handle anything thrown his way. He just hadn’t planned on the encounter of a lifetime with Lily. He craves for her like a heart needs to beat, but a relationship is absolutely out of the question.

I love to write!

I've been reading fiction for years and finally decided that the images and scenes floating around in my head needed to make it to paper.

I'm a huge fan of romance, highly optimistic, and wildly faithful to the HEA (happily ever after). I'm inspired by most anything around me. And my biggest obstacle is not having enough time to get it all down on paper (or my computer, as the case may be).

My goal is create a fantasy you will enjoy with characters you could love.

I live in Texas with my attentive, loving, super-model husband, and my perfectly behaved, brilliant children. My produce never wilts, there are no weeds in my flowerbeds, and chocolate is my favorite food group.
And then I wake up.

This story was originally part of an anthology called Blame It On Fate. The theme of the anthology was very simply fate.
I got to the end of the story and realized the characters weren't done with me. Which was fine with me because I really started falling in love with these two. This book as an HEA, but I couldn't help to feel like there could be more.
Lily has some insecurities, like we all do, and we see her grapple with them and slowly overcome them. But she is not needy or clingy. She has a good head on her shoulders and I love that.
Brandon is a classic workaholic. He has a hard time turning it off every day. When Lily comes into his life, he thinks it cannot work between them. Only in her leaving does he see what they had together.
I truly hope enjoy this story.

Brandon yanked his suitcase across the threshold, raised his head, and froze in place.
“Ohmigod. It’s you.”
“Oh.” He scanned the room. “Sorry. Crap.” His brow furrowed as he glanced down at his key card. “I’m . . . I think they put me in the wrong room.”
Seriously. She gripped the neck of her robe tighter. Her heartrate slowed as her brain processed that someone hadn’t just broken in to rape or rob her.
Breathe. “Yes, it would appear so.”
His gaze traveled down the length of her.
Shit! Her nipples probably poked against the white satin fabric. He appeared to be having a hard time processing this mix up as much as she because he said nothing. Nothing. He just looked at her.
She wrapped her arms across her chest. “Um, maybe you should go down to the front desk, Brandon, and let them know that you need another room.”
“Yes. Definitely.” He subtly shook his head. “Yes. I’m sorry about this. I’ve scared you and interrupted your sleep. I apologize.”
“No need. It’s not your fault.” She took a step closer—to show him to the door or to breathe in his scent, she couldn’t be sure.
Brandon stared down at the keycard. “How did this happen?” he asked the universe. He looked up and his lips lifted into a funny grin. “It’s weird that I walked into your room. Of all places.” He chuckled softly.
She smirked. It was true. Of all the wrong rooms to walk into, he’d walked into hers.
His eyes darkened as he scanned her body again. A blush filled her cheeks. She wore nothing beneath that robe. Could he tell she’d been thinking about him?
“Well, it was nice to see you again, Lily.”
“You too, Brandon.”
He twisted his body and gripped the handle on his carry-on suitcase, but stopped quickly to look her way. “Would you like to have dinner with me tomorrow night? I feel bad about this.”
“Um—”
“Please let me make it up to you. You know they have some of the world’s best pasta in Rome,” he said with a broad smile.
She guffawed because an image of Kirk, eyeing her as she scooped extra parmesan over a plate of spaghetti was the first image that popped in her head. “I’ll take you up on dinner, but I’ll stick with a salad.”
His eyebrows pinched together. “You don’t like pasta?”
“I love pasta. My ex said I should stay away from it.” The words came out before she could block them. Brandon did not need to hear the sordid details of what her ex thought about her and her eating habits. She bit her lips between her teeth.
He tipped his head. “Okay. Why?”
“Never mind.”
“Is it a gluten thing?”
Crap! Her head drooped for a split second. No good way to get out of this. “He said I put on weight too easily.”
Brandon’s eyes went wide. “He said that to you?” His voice pitched on the last word.
“Yes,” she mumbled. Could this be any more embarrassing?
She wouldn’t consider herself overweight, but definitely curvy. Slightly obsessed, Lily worked out regularly and had strong muscles. Regardless, she couldn’t rectify the number she saw every morning on the scale.
“No wonder you dumped the bastard.” Lily let the corner of her lips curve upward. She didn’t have the guts to tell Brandon that Kirk had dumped her.
His eyes narrowed. “Did he say you were fat?”
Shit! Really? She unknowingly sucked in her stomach. The most handsome man she’d ever met was standing six feet in front of her, wearing his suit with his shirt and tie loosened, and a five o’clock shadow that made her want to run her fingertips along his jawline. She stood naked in just a thin silky robe, and he wanted to have a psychology session?
She couldn’t answer so she glanced away. Kirk had said that once, but thankfully never again. He’d made her feel more self-conscience of her weight with his pointed stare at almost every meal.
Brandon let go of his luggage and took two steps closer. “From what I saw, your body is pretty amazing. I think your ex needs to have his head examined. That and be exiled to a deserted island with only rice cakes and raw broccoli to eat.”
Lily’s chuckle turned into a laugh. She actually loved that idea.
He smiled and took another step closer, never breaking eye contact. He stood so close to her now, he could effortlessly reach out and touch her. She licked her lips, her mouth suddenly dry, and tipped her head up to meet his gaze. His eyes appeared darker than she remembered, like rich espresso.
He offered his hand, palm up, and she hesitated . . . not scared, as much as unsure what he wanted. She released the death-grip on the lapels of her robe and rested her left hand in his. He slowly brought it to his mouth and kissed her knuckles, not once, but twice.
The warmth of his hand and the sensation of his kiss shot low-level electric waves throughout her body. Her lower belly clenched and she nearly moaned.
He stretched his right hand forward, as if he wanted to touch her.
“May I see for myself?”