You are here: Products Unbound by R.C. Butler 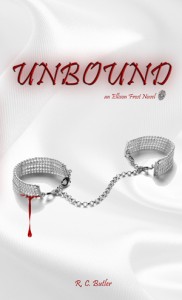 When a high profile socialite is found dead, posed in an extremely provocative position, Lieutenant Ellison Frost must set aside her personal connection in pursuit of the truth.

As the case pushes into the reaches of the victim’s sexually deviant lifestyle, Frost must battle exposing her own private life and the duality it has become.

Can she solve the case without exposing her twisted desires and risking her career? Does she continue to hide the shackles that restrain her or simply throw them to the light and forever be Unbound?

On a whim (possibly too much wine or not enough sleep) I decided to read Fifty Shades. I found it, odd. The characters didn’t feel true to themselves and I really didn’t feel that James did justice to the nature of the Dom/sub relationship. I felt it could be explored in a much more intriguing way so I started to write a series of fantasy sequences that focused on that exploration. I really enjoyed them and started to think about how to turn them into something that could qualify as a book. I didn’t want to write a love story but did want to explore the relationship dynamic within something more structured, especially the duality of a sexually submissive that is a class A personality. Ellison Frost was born and the book grew from there.

Be the first to review “Unbound by R.C. Butler” Cancel reply