You are here: Products Tyro Vogel’s Extatica by Tyro Vogel 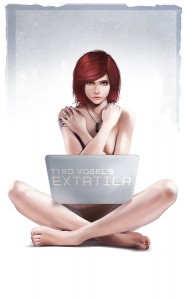 Is everything connected? Is there a world beyond our own? Is reality subjective to our perception? Is there a way to escape death? Is there a need to?

On the day her life changes from bad to terminal, Irina Filidilupi finds the answers she’s looking for in a man named Victor. He is a renegade scientist who had discovered a way to tap into the core of the universe itself. It is this technology that Irina’s new friend wants her to try: technology that is as likely to become her salvation as it is to hasten the end of the world.

Read his books to learn more.

Had no choice. All proceeds from the Amazon version of this book will be donated to The Breast Cancer Research Foundation. Alternatively, you can get the book for FREE from Smashwords.

What happened between them was the clash between two hearts too bent on getting what each wanted.
Irina wanted passion, art, adventure. Most of all, she wanted adventure. Her boyfriend, or, rather, her ex-boyfriend, wanted a comfortable life set against traditional family values. He’d said that she was “special,” that he’d been simply “too normal” for her. He should’ve known what he was getting into when he decided to date a redhead. This was months ago, but today Irina remembered that conversation well. Today was the day when everything had gotten much, much worse. She’d paid a visit to the hospital to check a small lump under her collarbone and had gotten the news of a lifetime: she had breast cancer.
Irina had been on her feet ever since, walking the streets of Budapest as if to stop meant to die.
The sun had already set by the time her tired feet had carried her to Margaret Island. She couldn’t run from this forever. Irina’s grandmother had died of breast cancer. It wasn’t pretty. They’d amputated both of her breasts, then she died anyway. But her grandmother had been nearly seventy when she was diagnosed; Irina was barely twenty-three. Life’s a bitch, she thought, and then you die. It was a morbid disposition. What she really needed to do was to sit down and get her head in order.
Moonlight stretched across the Danube River, the full moon reflected in its waves. Runners conquered the island’s perimeter, speeding along in segregated groups. The younger, less healthy-looking crowd contrasted them by occupying the benches on both sides of the runway, alcohol bottles in hand.
She headed past them and down to the water, planning to sit as close to the river as possible, when a man’s voice made her stop. “Excuse me?” he said in English.
Irina turned around. He sat on a bench a dozen meters away from the teenagers. She couldn’t see well in the dim light, but she found his features more hawkish than attractive, all angles and perpendiculars. His eyes were the color of faded cobalt, twinkling behind a pair of spectacles. Irina even noted the practical elegance of his haircut, a bit gray at the temples, before she realized the man was dressed as a monkey from the neck down. He wore a two color body jumpsuit of white-and-brown, complete with a tail hanging down from the bench. Either the circus was in town, or her kind of breast cancer came with hallucinations.