You are here: Products Two Reckless Hearts by Holly Cortelyou 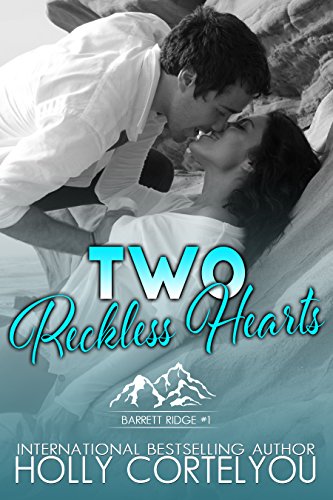 He’s a temptation she can’t risk…

Jami Barrett is fed up. First, she’s jilted by her fiancé, then she’s expected to endure her sister’s crazy Caribbean wedding. Now, her arch rival has crashed the party! But Beck Kavanagh is more than just the black-hearted foe set to ruin the family’s business and her chance to win her father’s trust, he’s the groom’s brother. To make matters worse, she can’t stop daydreaming about Beck’s laughing gray eyes and his surprisingly soft heart. With a make-or-break deal and her loyalty in the balance, Jami’s feeling the pressure…and the heat of her hidden desire.

Beck Kavanagh has no time for sarcastic, competitive women, especially one who’s his real estate adversary and newest in-law. Jami’s out for his blood, and all he wants is to keep the peace. Yet, her sharp wit and delicious curves make him yearn for a midnight, tropical tryst. When a wacky treasure hunt goes haywire and Jami tumbles into his arms, Beck knows he’s met his match and found his one true love.

Holly Cortelyou pens sweet and spicy small town, contemporary romances that just may have a kiss of magic or a twist mystery.
On any given day, she’s likely sipping coffee and procrastinating on Facebook or organizing a closet. Holly’s living her own Happily Ever After with an uber-handy, broad-shouldered and delicious husband, a sweet silver lab and a fluffball kitty in sun-kissed Southern Oregon.
She has hazel eyes, a goofy sense of humor and all the rest is subject to change without notice.

I’ve always daydreamed of the Caribbean’s silky, warm waters and the magical steel drums dancing in the balmy night air. So it was fun to whip up a make-believe tropical island off the coast of St. Lucia for the luxurious resort in Two Reckless Hearts.

Jami surveyed the list, and Beck peered over her shoulder. Her breath caught in her throat and a dart of tension shot between her thighs. He smelled of cedar and something tropical. It was divine. No, she was not going to let her knees buckle under her.
“What is a red ginger lily? And how are we supposed to know if we find one?” Beck’s bicep brushed hers as he leaned over and pointed at the second item on the list.
She was not going to break into a sweat. She steeled herself. She needed to remember she hated Beck Kavanagh. He was her competition, and she never lost her focus during a fight. Calm. She needed to find her Zen spot. Hell. Why did that make her think of a G-spot?
Jami pivoted and stepped away from Beck as she handed the hunt instructions to him, but Beck grabbed her wrist.
“Let go.”
“Hang on. Hold still.”
“No.”
“There’s something small, brown and very crawly, right in the middle of your back.”
Jami stiffened like a flag pole. “Get it off me.”
Beck rolled up the map and brushed at her back. “It’s stuck.”
Panic welled in Jami’s belly, but she dragged in a deep breath and exhaled in a low whistle. “You’ve got one job, mister. Now remove it.”
“Maybe you should drop, roll, and squish it?”
“Is that a joke?”
“Yes, but you don’t seem amused.” Beck studied a spot right between her shoulder blades. “Hmm. It seems to have quite a few sticky-looking legs. Very wriggly.”
“If you don’t get it off in the next five seconds, I’m going to rip this shirt right off my body and set it on fire.”
Beck grinned. “Do you want me to flick it off or not? I like your idea better.”
“Do it. Now.” Jami ground her teeth together as a whisper of wind tickled a wisp of hair against her neck. Her knees wobbled.
Beck wound up as if ready to smack the crap out of the bug, but at the last second, he slid the map under the crawler and flicked it away, deep into the ferny undergrowth next to the pathway. “You’re good to go.”
Jami jumped three feet to the side and shivered. “What the hell was it?”
“It was a BDB.”
“What?”
“A big damn bug.”
“Aren’t you the comedian?”
“I’m an engineer, not an entomologist.”
Jami scowled, but Beck grinned. She scrunched her eyebrows as if to convince him she was not amused, but he pointed at her and laughed. A burble of laughter escaped from between her lips.
“Fine. You win. I won’t take this so seriously.”
Beck threw back his head and laughed with ease. “I find that hard to believe.”
As one, they bent over the map and the list and plotted their next move together. Beck’s shoulder brushed hers, and Jami’s pulse jumped. She threw him a side-eye. His nose was straight, and that chin of his was square, determined, and utterly sexy. His thick black eyelashes swept low, and her heart lurched.
Jami leaned in, and her breasts brushed his arm as she delivered a fleeting kiss on the hard angle of his cheekbone. She sprang back before he could react.
“Thanks for rescuing me.”