You are here: Products Turn Around Bright Eyes (The Kathleen Turner Series at Kindle Worlds) by Riley Blake 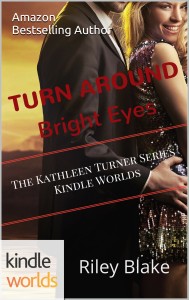 NOT EVERYONE PLAYS BY THE RULES

Kade Dennon tried to stay away from his brother’s girlfriend and remain loyal to the only family he’s ever known but Kathleen Turner is his forbidden fruit. Eventually temptation drags Kade back to Indianapolis and the one woman who feels like home.

THE PLAYERS CHANGED BUT THE GAME REMAINS THE SAME

Kathleen Turner knows what she wants and who she desires. She seizes a new job and an opportunity unfolds. Soon, she’s working with her boyfriend’s brother and nothing will ever be the same again when Kade stakes a claim and aims for Kathleen’s heart.

IT’S IMPOSSIBLE TO BREAK A PLAYER WHO REFUSES TO LOSE

Blane Kirk needs his brother Kade to keep his girlfriend safe but when he sends her out of Indianapolis to protect her, Blane has no idea what kind of danger Kade and Kathleen will find while testing a new Las Vegas casino loyalty program. When an old enemy resurfaces with threats and an agenda, Blane goes to Sin City to warn his brother and discovers a few unwanted surprises of his own.

A HOUSE OF CARDS NOW DESTINED TO FALL

Working side by side, Kathleen’s and Kade’s relationship quickly changes, a fact they can’t deny. Seduction and passion lead them to a night that will scorch the sand right off the Mohave Desert and this time, foreplay won’t sustain them. With no one to stop them, Kade and Kathleen tread into the realms of unforgivable betrayal. And when Blane arrives in Vegas, he realizes too late that his brother is now playing for keeps.

Riley Blake writes mysteries, thrillers, and suspense. In addition to writing her own novels slated for release in late 2015/early 2016, Riley enjoys writing for Amazon’s Kindle Worlds. When Riley isn’t writing, she enjoys cooking, going to garage sales, and redecorating her home with thrifty items. An animal lover, Riley has a potbelly pig, a few dogs, a couple of horses, and a chicken named Lord Wings.

A writer for several Kindle Worlds novels and novellas, I was looking for another series to add to current Kindle Worlds projects and ran across Tiffany Snow’s Kathleen Turner books. After reading her first novel No Turning Back, I was hooked and couldn’t wait to start writing for her series at Kindle Worlds.