You are here: Products Try A Little Tenderness by Christa Maurice 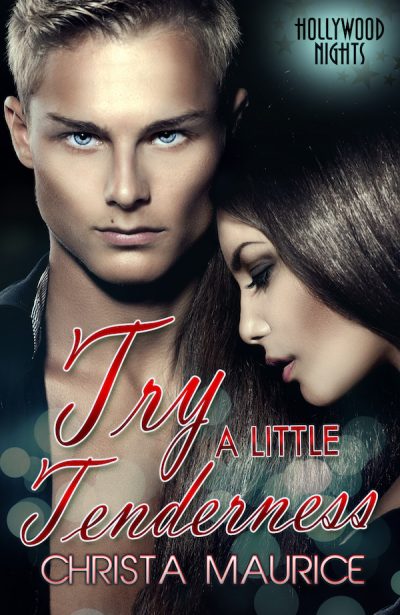 Taylor Elgin was a child star, but keeping her career as an adult is frustrating. Now executives want to cut her part unless she garners more audience appeal. Her producer has a perfect plan. Match her character up with a fan favorite played by hot guy and terrible actor Ryan Asher. It would be easier to just quit…

Ryan had a crush on Taylor when he was a kid and is thrilled to be partnered with her now. But does a guy carrying the scars of an abusive childhood deserve America’s Little Girl? And then to learn she never wanted to work with him in the first place? There’s no reason to even try…

Christa Maurice spends a lot of time lost in imagination. When not writing, she loves to travel and has spent several years living overseas. During her four years living in Abu Dhabi where the temperature was always hot and the sunrise and sunset were pretty stable year ‘round she could go weeks without speaking to a man who wasn’t selling her groceries. You know that happens to a woman living in what amounts to a harem situation? She spends a lot of time talking about shoes and thinking about men. Which brings us right back to being lost in imagination…

I am a huge (HUGE) Stargate fan so I was watching when an unknown actor named Jason Momoa came on as recurring character Ronan Dex. He was—how to be polite—not a stellar actor. There is one scene in particular that I laugh at every time I watch it because Jason is in the background and he's staring into space like he's thinking about his grocery list or something, The first time I saw it I thought, "I wonder how the other actors feel about having to work with this noob." A few seasons later, (when Jason had progressed A LOT in his acting ability) the show mangled a love triangle between David Hewlett's character, Jewel Staite's character and Jason's character. That was the real seed of Try a Little Tenderness, but it took years before I managed to write it..

Nothing happened for a long time. Then the door opened a sliver and she peered out. No tears on her cheeks. That was something. “I’m not sure that’s wise,” she said.
“What’s not wise? Letting me in? I’ve been in your place before.”
“I know.” She swallowed and opened the door a few more inches.
“We have to work together. A lot. Can you please let me explain?”
She walked away from the door, leaving it open, which he took as an invitation to come in. She stopped in front of her Christmas tree and took down a yellow angel ornament.
He swallowed. This was going to hurt. “I know you said he was the reason you left before the wrap party, but I’ve been lied to before. I guess I expect it now. I thought you lied about your boyfriend because you didn’t want to talk to me. I figured you were just using me to keep your part and I’m okay with it if that’s all there is.”
“You should never be okay with being used.”
“Yeah.” Ryan stared at the corner of the coffee table. She made it sound so easy. Don’t be okay with being used. Like that was an option. “Shit, Taylor. I thought we had more going on here. I guess I was imagining things.”
She hung the ornament back on the tree, blinking fast. “What do you mean?”
He knew that tone from her. That pained thread. She had never used it as Amelia Weston, but as Kimmie Arthur, when she was hurt and afraid. She looked so alone standing next to her color-coordinated Christmas tree with all of Los Angeles through the window behind her. If she pushed him away, rejected him, and he still had to work with her…. That would be agony. But if he didn’t try now he might never get another chance. “I thought maybe we had a chance of being more.”
“More than co-stars?” she asked. Her pretty lips bowed and her eyes drooped.
He crossed to the stand beside her. His hands ached to cradle her cheeks. He’d been dreaming about that kiss for two weeks. “More than friends.”
“Even though I was using you?”
“Were you?” Ryan’s breath locked in his throat. He didn’t want to know, but the question was already out there and he couldn’t take it back.
“No. I really—enjoy—being with you.” Her lips twisted.
“What about Garrett?” Ryan didn’t want to know, but he knew her well enough after the last two weeks to know she would want to know. She actually cared what he thought.
“What about him?”
“Did you enjoy being with him?” That was such a wimpy question and not what he wanted to know at all.
“With Garrett I didn’t have to be Kimmie, but with you I really felt comfortable being me and when I thought you thought I was just playing another part—“ Her voice squeaked to a stop.
“I’m sorry.” He’d sworn to himself that he would never kneel for anyone ever again, but desperate times…. He lowered himself to the floor. “Can you forgive me?”
“What are you doing?”
“Trying to get you to forgive me for thinking you made up your ex-boyfriend when you are absolutely hot enough to have a stable of studs at your beck and call.” He gathered her hands in his and pressed her fingers to his lips.
She giggled. “I’m not really the stable type.”
“But you could have one if you wanted one.” He nibbled on her knuckles. She had lovely little hands. From this vantage point, he was very close to her lovely little belly too. He could smell the clean, ocean scent of her and it was destroying his good sense.
“Ryan.” Her voice warmed. “Will you stand up? This is embarrassing.”
“There’s no one for you to be embarrassed in front of. It’s just you and me.” He leaned forward to brush his cheek against her shirt.
“Ryan.” Her fingers slipped away from his hands and tangled into his hair sending a cascade of shivers down his back.
He lifted her shirt and pressed his lips to her warm skin. Her belly flinched. She gasped.
He stood keeping close enough to feel her body against his. He slipped his hands under her shirt. Her skin was velvet soft and he wanted to taste every inch of her. “I want you.”
“I want you, too.” She wrapped her arms around his neck.