You are here: Products Trust Fall: Book One of The Trust Trilogy by Tess Quince 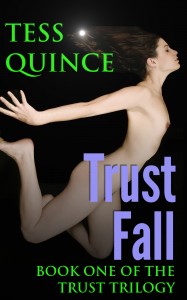 Trust Fall: Book One of The Trust Trilogy by Tess Quince

I didn’t know what I needed. Then he gave it to me.

I was doing okay, not great, but okay. I was a single mom with a five year old son. I had a successful, professional career that allowed me to provide a good home for both of us. My son’s father, my man-child ex-husband Josh, had come back into our lives.

Ben Sheppard was only in town for a month. Handsome, confident and perceptive, he saw the woman I didn’t know I was. He saw what I needed and wanted.

Then he gave it to me.

I thank him every day for that.

This is my story, my autobiography. I tell it honest as I can. I’ve changed the names to protect myself and my family. Otherwise, the story is written as I lived it.

I live in suburban Cincinnati, Ohio.

I was a lonely, single mom with a dead sex life until a man opened me up in many ways. I think other women are going through the same thing I did so I want to share the story of how I overcame that.

Be the first to review “Trust Fall: Book One of The Trust Trilogy by Tess Quince” Cancel reply