You are here: Products Trick Play by Jessica Kelly 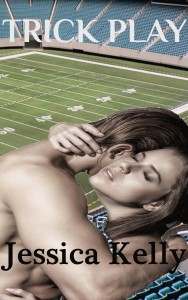 Rebecca Stone is smart and driven. She has dreamed of being a sports reporter for her entire life, and now that she has landed her very first job at a TV station in tiny Curtinville, Texas, her dream is starting to become a reality.

The only problem? Curtinville may be small in size, but it’s home to plenty of big secrets.

It doesn’t take long for Rebecca to figure out that money, power, and greed are the names of the game here. Everything that the beloved Curtinville Cats do on the football field is overshadowed by the dirty deals that are going on behind the scenes. The Cats aren’t the only ones who are good at drawing up trick plays. Some of the biggest names in town play dirty tricks every single day.

Rebecca arrives in Curtinville believing that hard work is the key to earning respect and building a successful career. She’s so serious about her work that she refuses to give in to her feelings for the steamy ex-quarterback — even though he has her squarely in his sights. But as she soon learns, doing the right thing doesn’t always pay off. In fact, in Curtinville, it can be the easiest way to land in some serious hot water.

How far will Curtinville’s elite go to keep their secrets hidden?

How many consequences will Rebecca suffer for exposing the truth?

Will all of those trick plays crush her dreams forever?

Jessica loves hearing from her readers. Connect with her on Twitter at http://twitter.com/WritingJessica or on Facebook at http://facebook.com/jessicakellyauthor.

It’s always been a dream of mine to become a published author. So, when I got a chance to combine my love of football with my love of fiction, it was an opportunity I couldn’t pass up!

Rebecca was trying to flag down the bartender for another beer when she felt a tap on her shoulder.
“Weren’t you at Cats’ practice today?”
Rebecca spun around on her barstool. It was Brock Boone. After all of her research, she would have noticed the former Cats’ star quarterback anywhere. It had been five years since Brock’s football career ended because of a nasty knee injury, but Rebecca was amazed to see that he still looked toned and trim enough to lead the Cats to victory. She was still appreciating his bright blue eyes and sandy blonde hair when she realized she hadn’t actually responded to his question.
“Yes, that was me. I’m Rebecca Stone. I just started working at Channel 8.”
“Nice to meet you. I’m Brock Boone.”
Rebecca caught herself before she blurted out, “Yes, I know!” She didn’t want to look like some kind of creepy stalker, especially to someone as cute as Brock.
“It’s about time we got some new blood around the team. Most of the guys who cover the Cats are really nice, but they’ve been here since dinosaurs roamed the earth.
Rebecca chuckled. “I think my Sports Director, Mick, has been here even longer than that.”
“Ah yes, Mick Jennings,” Brock sighed. “He’s really something. The first time he interviewed me, he told me he has the perfect name because he has the sex appeal of Mick Jagger and the on-air trustworthiness of Peter Jennings. Apparently, he tells that joke to everyone, and I’ve never found anyone who thought it was funny. He’s a total cheese ball.”
Rebecca groaned. “I guess I lucked out then. That wasn’t the greeting I got from him.”
Although considering the way Mick had acted during their first conversation, she would have gladly traded his nastiness for a corny joke.
“From what I saw at practice, you’re anything but cheesy. You were working harder than some of the players out there! I can see why you needed a cold beer… or three,” Brock laughed.
Rebecca had almost forgotten about the group of empty beer mugs sitting in front of her. She could feel her cheeks turning red, and before she could come up with a good-sounding reason for singlehandedly boosting Budweiser’s profit margins, Brock started talking again.
“I’m just pulling your chain. Have all the beer you want. You earned it. I’ll see you around practice again soon, Rebecca. It was very nice to meet you.”
His eyebrow arched up slightly, and when he smiled, Rebecca felt her stomach flutter. It was the first time her stomach had stopped churning since her run-in with Mick. Brock turned around and headed out the door, and Rebecca couldn’t help but notice that his backside was just as cute as his front side.
As good-looking as he was, though, Rebecca was stuck on three words he had said — “you earned it”. He was right. She had earned her place at Channel 8, whether Mick thought so or not. She was done feeling sorry for herself. Now it was time to get down to business and prove that she belonged here.