You are here: Products TRIBES by Mia Frances 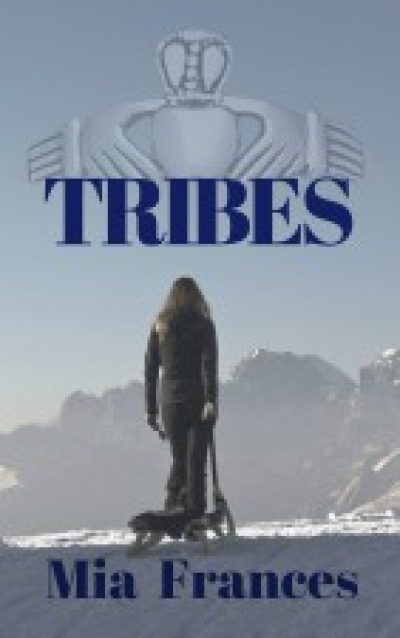 Alex is taking her sisters and their kids to her camp in the Adirondacks when the unthinkable happens: nuclear war. The radio warns them to seek immediate shelter. Greeted by guns and bullets when they try to find refuge, they are forced to hide in a cave to avoid the fallout. After two weeks in their dank hole, Alex discovers her sisters have gone back to the city to search for their husbands, leaving Alex to care for the children. It’s a 35-mile hike to her camp. A journey through hell! The hamlets and villages they pass through have been turned into killing fields. Society is devolving. Chaos reigns as looters, murderers, and rapists hold sway. Along the way, Alex rescues two children orphaned by the violence. Driven by starvation, she stumbles on a hidden cache of food only to discover it’s guarded by a man who’ll haunt her nightmares. Half guardian angel, half demon. Both barbarian and benefactor. A strange mixture of brutality and gentleness, cruelty and caring. A man named Wolf!

Mia Frances is the pen name of author Mary Vigliante Szydlowski. As Mia, she's the author of the dark post-apocalyptic romance, TRIBES; steamy romantic suspense novel, Little Girl Lost; and the erotic romance, murder mystery series: IN HIS KEEPING: TAKEN, IN HIS KEEPING: BANISHED, and IN HIS KEEPING: CLAIMED.
Her Science Fiction/Fantasy works include novels: The Ark (Jarl Szydlow), The Colony (Mary Vigliante), The Land (Mary Vigliante), Source of Evil (Mary Vigliante), and novella, The Hand of My Enemy. She's also the author of horror novel, Worship the Night; and Dark Realm, the tale of a dystopian world ruled by Satan. In addition, she's the author of mainstream novel Silent Song. She’s also published 10 children's book: Are We There Yet?, Little Sowbug & the Big Flood, Ghoul School, Millie Muldoon & the Case of the Halloween Haunting, Millie Muldoon & the Case of the Thanksgiving Turkey-napper, Millie Muldoon & the Christmas Mystery, A Puddle for Poo, Kia’s Manatee, The Duck in the Hole, and I Can't Talk I've Got Farbles In My Mouth.
Her short stories, articles, children’s stories, essays, and poems have appeared in books, magazines, newspapers, and on the web. She's also a contributor to the Chicken Soup for the Soul anthologies: The Dog Did What?, Volunteering and Giving Back, Merry Christmas!, Mom Knows Best, and Life Lessons from the Dog.
She's a member of the Authors’ Guild, Society of Children’s Books Writers and Illustrators, Science Fiction & Fantasy Writers of America, and Romance Writers of America.

My husband and I have spent a lot of time roaming the Adirondack Mountains of upstate New York. On one trip we spied a cave above the Hudson River. The river is wide there, but relatively shallow. We decided to ford it and explore the cave. That is where I had my characters wait out the fallout after the attack. Crossing the roiling water, climbing up the steep incline to the cave, and crawling around inside it gave me the idea for TRIBES.