You are here: Products Tribeless by Ann Sepino 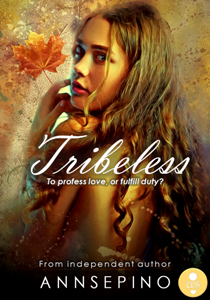 She loves him, he loves her not, and there’s nothing she can do about it.

In order for their tribe of Gob Edis to flourish, Naomi knows that things have to stay the way they are. She has to hide her feelings for her sister Noya’s betrothed. She has to watch as an engagement between Noya and Akiba, future chief of Niatnuom, is made.

Then fate takes an astonishing turn when the wedding doesn’t take place, and Naomi becomes Akiba’s tribe servant instead. Now that she’s part of the lowliest caste, she has to tamp down her emotions and instead carry out the duties of a Tribeless. But her new chief’s tenacity and her own obstinate character make that task difficult.

When the real reason for the broken engagement is revealed, Naomi is given one last chance to profess her love, instead of just fulfill her duty.

Hello everyone! My name is Ann, and I am an independent Filipino author with a passion for poetry and writing. My love for writing began at five years old, when I drew a picture book as part of my kindergarten project. My fascination with romance novels began at fourteen. I lean towards creating female protagonists with characteristics such as loyalty, longevity and inner strength, much like the sunflower depicted in my logo.

I love writing about knights-in-distress and damsels-in-shining-armor. I also enjoy referencing and incorporating Filipino or Asian culture into my stories. When I'm not writing in my notebook or typing on my laptop, I'm probably binging on anime, drawing on my sketch pad or killing it at karaoke.

As an independent author, I’ve made it my mission to promote variety, and cultural and ethnic diversity within the romance genre. Tribeless is another of my attempts to fulfill this mission. The fictional world in this story was inspired by the pre-colonial customs and traditions of my country, which I mixed with elements of magic and light fantasy.

The brook was shallow, but her sudden fall disoriented her enough that it made rising from beneath the clear surface difficult. Naomi struggled fiercely, until two strong arms surrounded her torso and pulled her up. She found herself steadied in the embrace of the young stranger.

“Are you all right? Are you hurt?” he asked, his brown-eyed gaze connecting with hers. Naomi was stunned to say the least. She was in the arms of a complete stranger, pressed against his glorious physique without so much as an inch of space between them. She felt light-headed from being surrounded by the warmth of his body, from the masculine fragrance that seeped through his pores. She felt the heat of her own attraction rise to her cheeks.

Naomi attempted to say something, but water had gotten the best of her throat. She covered her mouth and coughed repeatedly. His warm hand rubbed at her back to help.

“You took quite a tumble there,” he said with genuine concern. “Did I frighten you? I assure you I meant no harm.”

He had an attractive rumble to his voice, and it caught Naomi completely off guard. Never had she been saved or greeted so politely by such a beautiful man before. Of course, there were very few beautiful men in her tribe in the first place.

“I… I think I’m all right,” she replied softly, a little lost as to how to address the noble. Her voice came out in a tiny squeak, like the chirrup of a hatchling. Her cheeks colored deeply from embarrassment.

“Since you appear to be out of danger, may we start over?” A small, amused smile appeared on the man’s face. However, he made no extra comments about her reply. He had the good grace to spare her further discomfort by moving back and getting to the gist of his sudden arrival. “Good day, Miss. I was hoping you could offer me information on something.”

Be the first to review “Tribeless by Ann Sepino” Cancel reply