You are here: Products Touched by a Princess by Deon Potgieter 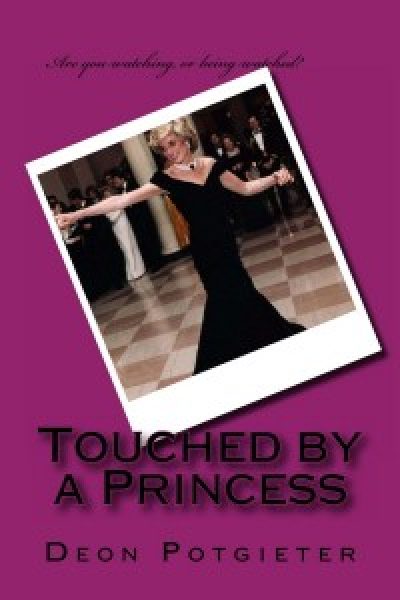 Touched by a Princess by Deon Potgieter

Brad Winwood, a photographer long obsessed with Princess Diana finally gets to meet her on the minefields of Angola and was also there when she died on that fateful night in Paris. What was it that brought him there and did he play a role in it? Beyond their connection this is a story about a quest for love and understanding the why and how in life and relationships.

Deon Potgieter is an award winning producer, director and Internationally renowned author, writer and journalist. He has worked across all media platforms with distinction. Amongst a plethora of popular and award winning shows, Deon also produced, directed and co-wrote the hit television series “Family Bonds”, which boasted the highest viewership of any sitcom ever in SA television history and won the Best sitcom SAFTA award 2010. His debut book “Rose of Soweto” published by Penguin books, made the Alan Paton literary award 2010 long list and has received wide International acclaim

I like millions of people throughout the world was moved by the life and death of the inspirational Princess Diana. So much so that it inspired me to write a story about how her life touched that of another quite unlikely life and how he may have touched hers.

Prologue
Good bye English rose
“Your candle went out long before, your legend ever will!”
Elton John
It had been a long day. A day Brad Winwood would never forget. He sat alone now and for the first time reflected on what had happened. A wet mist clouded his brain as he tried to recollect how everything had started. It felt as though he was in a dream. Another dimension completely detached from his reality. How did this happen? The day had started just as it always does. The sun came up. Everything was normal. Normal being defined as: conforming to a standard, regular, usual or typical. Free from mental or emotional disorder. Yes, another word for normal might be the big B word. Boring! There was a moments excitement as he nicked himself on the chin with a razor blade sending a few drops of blood splattering all over the white basin in the hotel’s bathroom. It’s odd how a man feels more like a man when he injures himself. “Look mom, I cut my face and I’m not even crying! Boy I’m tough. Now I’ve got a story to tell.” Perhaps it’s the reminder that one’s still alive. If you weren’t you wouldn’t feel the pain. Maybe that’s why it feels good to feel something every so often. Be it good or bad. If it’s there, so are you. At this moment though, Brad wished that he was not. He wished that he never was. Death’s comforting embrace called to him. Surely this would be the only way of escaping the reality of what had happened. At least, if he was dead, he would now be with his Princess.
As the sun came up the next day, even it seemed to be in mourning. Brad’s mind was still shrouded in that hollow feeling that fills you when someone close to you has died. He had been up all night, hoping that someone would come and wake him up. Tell him he was dreaming. It was all just a terrible dream. The Princess was still alive. Why didn’t someone come and tell him that she was still alive. How could someone so beautiful be dead? It must be a lie. Brad walked to the window of his hotel room and looked out over the city they call the most romantic in the world. Yet it was this city that took her. Here is where she died. Here is where he is standing. It’s not right, he thought. “God, why didn’t you take me instead?” He peered down at the road below. Rue La Fayette was busy as usual. People were going about their petty little lives, while she lay lifeless. Where? What did they say on CNN? Where was her body? He wanted to watch. Hear what they had to say. But it hurt too much. A whirlpool now broke through his paining skull and sucked all the information stored in his brain deeper and deeper into the darkness of his soul. All he could see were her smiling eyes.