You are here: Products Tormino’s by Yuuki Haneda 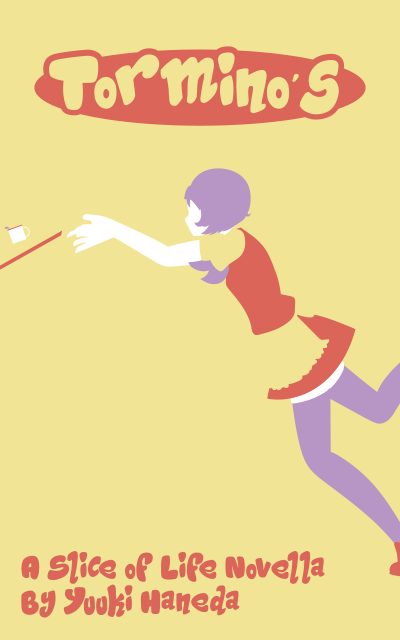 Miles Sonatas’ parents approved for him to get a part-time job during his final years of high school, but he soon learns the family restaurant he works at is anything but normal. He is immediately welcomed by his co-workers, and oddly enough, finds himself accepting of their quirks. Such as the lazy manager, Cyrus who calls everyone by their last name and sits in his closet of an office all day. Or the chefs, Shasta, who is very protective of his kitchen, and Sierra, who has a song stuck in her head. Then there are the other servers, Anita, who is searching for her soulmate, Oliver, a struggling artist who lives in the restaurant attic, and the ever clumsy waitress, Ramona.
When Miles catches Ramona on the first day, everyone believes love in the air. Despite this new habit, Miles and Ramona insist there is nothing between them. Or is there?
A slice of life novella featuring a cast of colorful characters and the hilarity and romance that ensues.

Yuuki Haneda loved reading since before she could talk, so much so her first word was even "book". With the love of reading came the love of writing, and she graduated from University with a degree in Screenwriting. Since graduating, she had various jobs but not one of them related to books or screenwriting. Reaching the ripe old age of 25, Yuuki is taking a step forward to finally pursue a career as an author with her first book, "Tormino's".

When I worked two office jobs, part-time and at the same time, I found fun co-workers made the job fun, even doing mundane things. After watching a show with fun characters in a mundane setting, I was inspired to write about interesting characters working in a restaurant.

Tormino’s Family Diner sat on Cambridge Avenue near the local hospital. Behind the restaurant flowed a river with a nearby bridge crossing over it. Right now, the restaurant looked vacant, at least from the outside; but inside the diner, Oliver Agate was getting ready for the long night of painting a new mural. He set out the plastic tarp at the base of the wall, taping it so no paint would spill on the carpet. He felt a slight tug on his painting shirt and turned to see Ramona Mori, another server, dressed to go home.
“Have you decided what you are going to do for the mural?” she whispered, her mouth covered by her hand. Typically, people struggled to hear her soft voice, but in the quietness of the closed restaurant, it sounded natural. Plus, Oliver had been working with her long enough to understand her mumblings.
“I’m thinking about this one.” Oliver pulled his sketchbook closer, flipping to a page before showing it to his younger co-worker. Her eyes sparkled in agreement. The page had a playful winter scene in front of the restaurant, with snowmen replacing the people.
“Everyone out?”
They turned around to see their manager, Cyrus Serrano, approach the front with a piece of paper in hand.
“Mori, you should head home already. We closed half an hour ago,” he snapped, marching ahead to the front door to lock it.
“Um, Linda wanted me to ask you if I could bring the holiday basket tomorrow to start collecting donations,” Ramona whispered as she followed Cyrus.
“Yeah, yeah, that’s fine; make sure it is small enough so it won’t block the entry.”
“Thank you!”
Ramona turned and ran towards the back exit, tripping over her feet, but managing to catch herself.
“You alright?” asked a concerned Oliver as Cyrus shook the door, making sure it was locked tight. Ramona looked over at Oliver and smiled in embarrassment before moseying out of the restaurant.
Both Cyrus and Oliver dared to breathe once she left.
“I swear that girl needs to be more careful,” grumbled Cyrus as he watched the space where she had left.
“She’s trying.”
Cyrus shrugged, looking back at his remaining underling.
“Still, she’s a walking hazard. I’m terrified of the day she’ll hurt herself.”
“Because Linda will be on your case about not being more careful with her.”
Cyrus scowled, “She’s a high schooler, albeit a clumsy one. She can choose whether she wants work or not.”
Cyrus turned back to the glass, putting up a piece of paper in the window. Oliver turned at the fluttering of the sheet stuck to the window.
“What’s that?”
“Corporate approved hiring a new employee. Hopefully, we’ll get someone before the holiday rush.”
When he was confident the paper stuck to the window, Cyrus started walking to the exit.
“If you sleep, make sure everything is off. And don’t mess up the carpet.”
“Alright,” Oliver waved him off before returning to his tools, making sure he had everything he needed. Cyrus watched him for a few moments before leaving.
“Get a place to sleep,” he yelled out before leaving the restaurant, locking the back door behind him.
Oliver smiled and shook his head. Fat chance a struggling artist working at a diner could afford a place of his own.
He set up his sketchbook to see the drawing, double-checking he had everything. He looked around the quiet restaurant and over at the window to see the illuminated words, ‘Help Wanted.’
He turned back to his work, ready to paint.