You are here: Products Too Many Reasons by Kristen Strassel 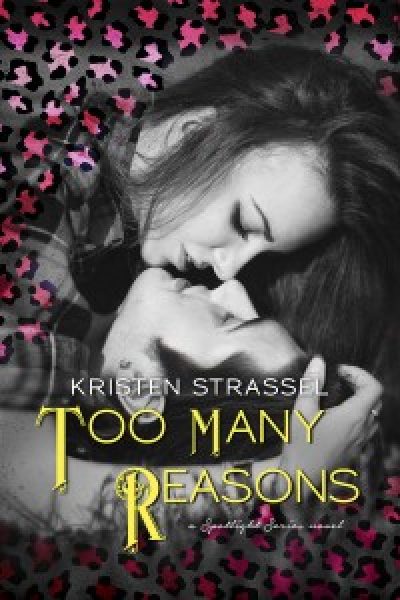 Too Many Reasons by Kristen Strassel

Abby Gauthier is close to getting everything she’s worked so hard for. The band she manages, Sinister Riot, has been offered a major record contract. But it comes with a catch: the band must add Eli Jamison, winner of the talent show The Spotlight, to the lineup.

Devon Sinclair is the singer of Sinister Riot, and he’s Abby’s best friend. She’s in love with him, but fears she’ll lose him if she makes the first move. Devon thinks adding Eli to the band is dangerous, and he’s right. Eli’s interested in more than just making an album. He wants to take control of the band, and he wants to get to know Abby better. A lot better.

When tensions between Devon and Eli threaten to destroy Sinister Riot, Abby must act on her true feelings or lose everything she’s ever wanted.

Kristen Strassel writes books about rock stars and vampires. After all, they tell you to write what you know. She is a passionate music fan who also loves football games and diner food. Kristen works as a makeup artist on film and TV shows when she’s not writing, and loves being behind the scenes. A former resident of Las Vegas, Kristen now lives in the Boston area.

“What the hell are you doing here? You scared the shit out of me.” He had a key, so it wasn’t like he didn’t have a permanent invite. But tonight? Come on.
“I wanted to make sure you got home safe.” He laid on the futon, one leg thrown over the back cushion. It didn’t appear that he was actually doing anything, but waiting for me. The cat was curled up on his stomach. Thank God Mallory still hadn’t come back. Or maybe not. She would have sent his ass packing.
“You could have just texted.” I took off my jacket and tossed it at him. Ziggy took offense, disappearing into some dark corner. I refused to sit next to him, instead I sank into the bean bag chair to unlace my boots. After dancing for a good part of the night, my feet were begging me to take them off. I hadn’t noticed until now.
“You didn’t answer me earlier.” He watched my fingers free my legs from the ties. Once I was only in my socks, I curled my legs under my body, but sitting practically on the floor made me feel too small and Devon too big. He was acting like an irrational asshole and I didn’t want to give him any more power. I practically jumped to my feet.
“Because I was out. With someone. And I didn’t want to be rude like some people and spend the whole night on the phone texting someone else.” Like Devon did with Lexi when he went out with me. I filled a glass with water and drank it all in one long sip. “Did I need to be concerned? Was I out with a serial killer?”
Devon scoffed. “No.”
“So what you really wanted to do was make sure I didn’t bring him upstairs with me.” I crossed my arms and started pacing in front of him. I wanted to ask him about all the things Eli had told me he’d said, but it just seemed petty. “What would you have done if I had?”
“You can do whatever you want, Abby.” He sat up, raking his fingers through his hair. “Where’d you go?”
“Magdalena’s.”
“Shrimp and grits? Hurricanes?”
I nodded. “Then I took him to—“
“The Apple Barrel.” Devon finished my sentence as he sat up. “All the things we like to do.”
“All the things I like to do, with any good company.” I stopped, arms still crossed. “Would you even be here if I’d gone out with anyone else?” I wondered if Devon had known about my date before he’d texted me tonight.
“I don’t know.” Our eyes locked in fury and frustration. “He didn’t even kiss you.”
“That’s not true.” My whole body shook.
Devon’s lips turned upward, a half-smile. “Your lip gloss is still perfect.”
“Maybe I put more on.”
“To come upstairs?” He shook his head. “No, you didn’t.”
“Why do you even care? Do you want to kiss me?” I couldn’t believe I actually said it. Out loud. A couple of drinks and one date and I was feeling really cocky.
In slow motion, Devon pushed himself up off the futon so he stood just inches from me. I didn’t move, or even uncross my arms. He rested his hands on my elbows, and looked down at me in a way he never had before. Like he was seeing me for the first time. My heart slammed against my ribcage for the second time that night, and I was glad my arms were there to keep everything in place. He ran his teeth against his lip ring, drawing my eyes to the motion. He closed his eyes and leaned forward.
I’d pictured this moment a thousand times, so some of it seemed very familiar to me: the chunk of hair that fell in his eyes as he lowered his face to mine, the way his bottom lip moved against his teeth when he felt unsure of himself.
No. It wasn’t supposed to be like this.
I turned my head and his lips brushed against my cheek. “Don’t.” I could barely speak.
“Abby.” His fingers moved against the back of my arm and I shivered. His words were so soft, if we weren’t so close I might not have heard them. “You asked me what I wanted.”
Frozen in place, I stared at my shoes next to the bean bag. “I don’t want you to do this because you’re pissed off that I went out with Eli,” I whispered. Eight years I waited for him to finally make that move, and I think I had the right to lay some ground rules. If I was going to kiss him, it wasn’t going to be cheap and full of regret. “That’s not how I want this to be.”