You are here: Products TOO LITTLE, TOO LATE by Marta Tandori 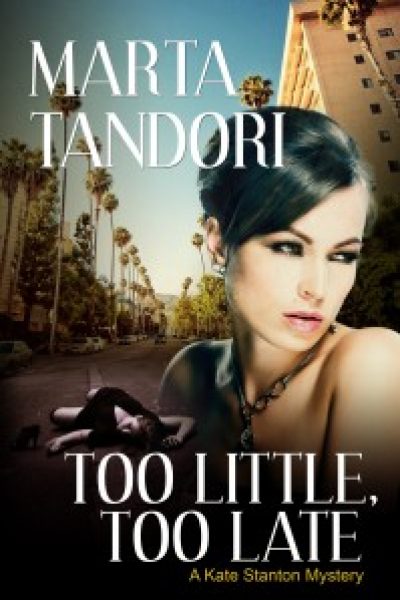 TOO LITTLE, TOO LATE by Marta Tandori

A young runaway takes refuge in a makeshift shack under the Hollywood Freeway, forcing the autistic woman in it to find milk for her sickly newborn – a search that ultimately ends in tragedy when the woman is run down by a hit-and-run driver after a violent confrontation with several teenagers. When one of those teenagers, seventeen-year-old Karen Devane, is implicated in the woman’s homicide, the tabloids are quick to exploit the tragedy, thanks to Karen’s recent antics as a spoiled Tinseltown “celebrat” riding on the coattails of her famous grandmother, the legendary Kate Stanton. Complicating matters is the dead woman’s daughter, who’s determined that Karen be held accountable for her mother’s death, even after the charges against Karen are dropped. With tensions between Karen and her family near breaking point and the paparazzi relentlessly hounding her every move, Karen makes a startling discovery which finally puts her on the road to redemption – and links the dead woman to her beloved grandmother.

Karen’s discovery raises a host of troubling questions for Kate, forcing her to revisit the horrors of her past in search of answers. But Kate soon realizes that some questions are better left unasked after a seemingly random shooting leaves her granddaughter fighting for her life and Kate scrambling to stay one step ahead of a killer who’s determined to end her life in order to save his own.

By the time Marta Tandori reached fifth grade, she was an avid reader and writer with a stack of short stories collecting dust in a box under her bed but it wasn’t until she began studying acting in her early twenties at the prestigious American Academy of Dramatic Arts in New York that Marta realized acting wasn’t really her passion – writing fiction was. What followed was years of writing workshops as well as correspondence courses in writing for children through the Institute of Children’s Literature in Connecticut. She credits the award winning author, Troon Harrison, as the instructor who helped her find her literary voice. Marta’s first work of juvenile fiction, BEING SAM, NO MATTER WHAT was published in 2005, followed by EVERY WHICH WAY BUT KUKU! in 2006. With her more recent endeavors, Marta has shifted her writing focus to “women’s suspense”, a genre she fondly describes as having “strong female protagonists with closets full of nasty skeletons and the odd murder or two to complicate their already complicated lives”. To learn more about Marta, visit her blog, The Marta/Kindle Project at http://martatandori.com.

My love of all things Hollywood inspired me to write this book.

“These roses are lovely,” said Esther in delight. “It was nice of you to bring them for me.”
“I know how much you love roses,” Kate told her as she placed the roses and baby’s breath in a crystal vase, doing her best to hide her surprise at Esther’s wan appearance. “How are you feeling today?”
Esther avoided Kate’s eyes as she smoothed the covers over her lap. “I’m no better or worse for wear, as the saying goes.” She took Kate’s hand and pulled her down beside her wheelchair. “Now you didn’t come all the way out here just to talk about my health, did you?”
“I didn’t?” asked Kate, feigning innocence.
Esther gave her a knowing look. “We’ve been friends for a long time and I know when something’s bothering you. Lucky for you, I’ve got all my marbles today, so shoot.” She sat up straight in her wheelchair. “I’m all ears.”
Kate grinned at her, unable to suppress her amusement. “Has anyone ever told you you’re a nosy old busybody?”
“I should hope so,” the older woman shot back. “It’s what keeps my ticker ticking. So, what gives?”
“Paul Wagner has decided to put out a special anniversary edition of the Paisleys’ Greatest Hits Collection and he’s asked me to be a part of it.”
“And you said?”
Kate sighed. “I agreed to do it. It seemed fair considering he practically handed me the listing on his estate.”
Esther nodded thoughtfully. “Maybe your head is telling you the time is right.”
Kate decided to tell her what had been uppermost on her mind for the past few days. “Paul’s also invited me to go with him to an art gallery in a few weeks,” she said hesitantly, “in San Francisco.”
“Really.” That one word spoke volumes as Esther gave Kate a shrewd look. “It seems to me like there’s a bit more than just a tit for a tat going on between you two.”
Kate grimaced. “I wish you wouldn’t use those words. Anyway,” she forged ahead, “we’d leave Friday afternoon and return on Sunday.”
“Make sure you pack a few sweaters,” her friend offered sagely. “It can get chilly at night this time of the year – from what I can remember, of course.”
Kate looked at her in exasperation. “Is that all you’re going to say?”
“What else do you want me to say?” Esther asked reasonably. “Do you want me to tell you that you shouldn’t go?”
“Of course not.” Kate flipped open one of the magazines lying on the table. After a moment’s pause, she sheepishly asked, “Should I go?”
“It depends on what you’re afraid of.”
“What makes you think I’m afraid of something?” Kate impatiently threw the magazine back on the bedside table, studiously avoiding her friend’s gaze.
“Because you keep answering my questions with questions.” Esther took hold of her hand. “You don’t have to tell me you’re attracted to the man. Anyone with half a brain can see that.” She held up her hand to ward off her friend’s immediate protest.
Kate slumped down onto Esther’s bed. “So, it’s that obvious, is it?” Seeing Esther’s lascivious grin only made her feel worse. “Don’t answer that.”
“Let’s examine the facts.” Esther straightened her back, all businesslike as she began ticking points off on her arthritic fingers. “He’s a single, attractive man, last time I saw him. Takes after his father in the looks department. He’s got a healthy bank balance and he’s straight. What’s not to like? Hell, I’d even go if he promised to spring me from here.”
“Maybe I’m reading more into his invitation than I should be,” Kate argued. “After all, we’re supposed to be looking for a piece of art for his main foyer.”
“Maybe you’re not,” Esther countered.
Kate fiddled with the coverlet on Esther’s bed. “This is ridiculous. I’m acting like an inexperienced school girl trying to figure out how far to go on a first date.” She stared at her friend helplessly. “What should I do?”
“I think you should go,” said Esther firmly. “Marcus would want you to go. Just make sure he uses a condom.”
“That wasn’t funny!” Kate pretended to glare at her balefully. “Someone your age shouldn’t have their mind in the gutter.”
“Someone my age is just grateful to have my faculties at all – most of the time, anyway,” Esther retorted wickedly. “Besides, you’re never too old for a lecture on safe sex. And you’re forgetting one thing.”
“What’s that?” asked Kate suspiciously.
“If all Paul Wagner wanted to do was jump your old bones, he could’ve asked you to go with him somewhere on his jet and then deflowered you in the sky.”
Kate rolled her eyes. “I think I’m a little beyond deflowering.”
“The point is, there are worse things you could do than be in the man’s company for a few days, right?”
“Right,” she admitted.
“Good.” Esther pointed towards the door. “Now that we’ve got that settled, you can take me for a spin in this Godforsaken contraption.”

Be the first to review “TOO LITTLE, TOO LATE by Marta Tandori” Cancel reply