You are here: Products To Win Her Love by Mackenzie Crowne 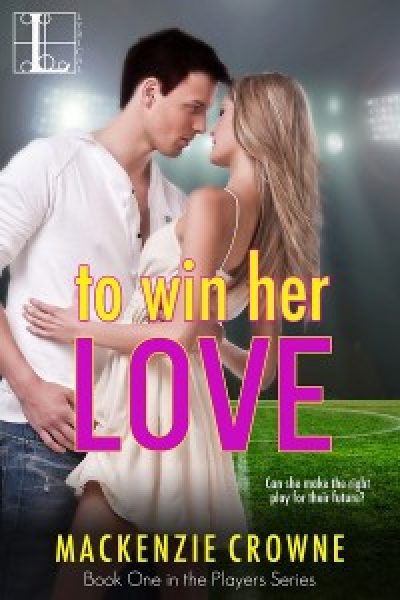 To Win Her Love by Mackenzie Crowne

To win the game, they’ll have to risk losing their hearts…

When a bizarre child custody stipulation pits popular sports blogger Gracie Gable against football superstar Jake Malone, losing the battle for her twin nieces isn’t the only thing Gracie has to worry about. Forced to live for three months under the same roof as the sexy tight end, will she fall prey to his flirtatious pursuit? Or worse, will the skeletons in her closet destroy her chance for the love and family she so desperately wants?

Neglected by his parents as a boy, Jake doesn’t believe in happily ever after. Yet living with Gracie and the twins might be enough to change his mind—and his womanizing ways. But when the press unearths a scandal from Gracie’s past, will he lose the one woman he was ready to open his heart to?

Raised on the concept that a stranger is just one conversation away from being a friend, I love meeting new people. My friends call me Mac. I hope you will too.

I love stories full of heart with strong heroines and solid heroes. Fun characters I can see myself sitting down with to share a martini are my absolute favorites. With the “Players” gang, I’d end up smashed, but the laughs and heartfelt emotion of their individual quests toward HEA would be well worth the hangover.

“Are you sure you don’t want to change your shoes?”
She spun around. “What’s with you and my shoe—aah!” She jumped back.
A mere inch away, he dipped his head, bringing them even closer. “I can’t help it. I’m a leg man. There’s nothing sexier than a long-legged woman in a pair of three-inch heels.” Like a predator on the scent, he stepped forward, crowding her up against the closed door.
Her shoulders thumped against wood.
His drawl smoothed into a seductive purr. “I’d sure hate to see them ruined when they get wet. The shoes, I mean.” He paused for a long, suggestive beat and his lips tilted in a distinctly wicked smile. “Your legs would only look better wet.”
She gasped. “Stop doing that!”
“Doing what?” The mischievous glint in his eyes ruined his attempt at looking innocent.
“Making suggestive comments like you’re…like you’re flirting or something. I’m the enemy, remember?”
He dropped his gaze to run his eyes over her body in a slow survey. “Oh, princess. You could never be the enemy.”
She mentally stomped her heel down on the prickles of awareness his sexy tone and blatant once-over produced. Hah! Rattled by his not-so-subtle flirting, she’d forgotten who she was dealing with. Too bad for him he’d overplayed his hand.
Princess, my ass.
Royalty was rare amongst the residents of the New York City Housing Authority. The art of street fighting wasn’t. If the all-pro superstar thought he could blitz her with a few well-placed innuendos, he deserved to learn what it was like to get sacked.
She widened her eyes, batting her lashes as if dazzled by his flirty compliment, and puckered her lips on a breathy “Oh.” She nearly ruined the affect by smirking when her acting skills proved more adequate than she’d hoped. His gaze dropped to her mouth and stayed there.
Another step sandwiched her between his body and the door. Doing her best to ignore the giddy leap of her heart, she pressed her spread fingers against the soft sweater covering his chest, beneath his open jacket. His glittering green gaze lifted to tangle with hers and, though she longed to experience the kiss the sensual intent gleaming in his eyes promised, she was no more a fool than she was a princess.
Already at a disadvantage with her unwanted housemate, gaining firsthand knowledge of what it was like to lock lips with him would only make matters worse. No, if she was going to survive living with him for the next ninety days, it would be best to lay some ground rules right now. For both of them, but first, he was going to learn who he was dealing with.
Holding his gaze, she rode her hand up over the hard plains of his chest to his shoulder then twined her fingers into the silky hair falling to his collar. She had to cut off an appreciative moan. So soft. A fascinated shiver lifted the fine follicles of hair on the back of her neck and arms when his pupils dilated once again. He dipped his head another inch. Heated spice tickled her senses, making her mouth water and her nostrils quiver in greedy delight.
Oh, holy hell. He smells better than Mary’s chocolate chip cookies.
He lowered his head until no more than a breath separated his lips from hers, and she momentarily lost track of her agenda. Gleaming striations brightened the green of his eyes as they smoldered with the promise of lovely, decadent secrets.
A sigh shimmered from her lips when he closed the remaining distance between them. Her eyes slid shut as, warm and surprisingly tender, his lips brushed hers, nibbling in no particular pattern. Small brush fires flashed to life throughout her system. Heat flared when he deepened the contact, sliding his arms around her and demanding entrance to her mouth with a hot flick of his tongue. A nagging disquiet hovered at the edge of her awareness, but she was helpless against his seductive onslaught.
She obliged him, opening her mouth to curl her tongue with his. Spice and heat tempted and teased. What was a woman to do when faced with such an irresistible combination? She sucked at the silky tongue tangling with hers then moaned at the rich flavor exploding on her taste buds like a sumptuous treat.
Strong arms hauled her up against a muscled chest and thighs. Iron hard interest pressed against her belly.
Snap out of it! Swallowing Jake Malone’s tongue is not part of the plan.
With an inward wince at her flagging willpower, she moved with more panic than grace. Fortunately, her lack of finesse didn’t matter. A healthy shove to his chest with one hand accompanied a sharp tug on his hair with the other. A quick jerk of her high-heeled boot behind his knee finished the job and the Marauders’ number one tight end toppled backward to sprawl at her feet.
Murphy barked excitedly and pranced around Jake’s prone form.
She sucked in air. “Not your enemy, huh? Wanna bet?”