You are here: Products To Wed the Fae Prince by V. Vervain 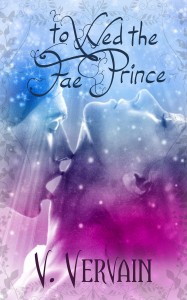 To Wed the Fae Prince by V. Vervain

Etta Cooper has been promised to marry the Prince of the Faeries since before she was born. A move from her mundane life and family take her into the enchanted Faeryland where she is promised to the handsome Bronn, eldest prince of the Fae King, but when Bronn decides he doesn’t want her she is betrothed to his elegant, introspective, and… sullen younger brother Farron. Farron is a human hater. Trapped in this lush, beautiful world of faery Etta longs to escape until she begins to spend time with Farron, and their conversations slowly chip away at the frosty, superior mask he wears. Perhaps, just perhaps Farron is exactly the challenge she’s been looking for…

I was going to be given to a stranger. I stood alone in a sea of unfamiliar faces, scared, angry, resentful. Sent here without a choice in the matter, as property to be disposed of on a whim of a king. I could only imagine the fate in store for me. Despite all of my misgivings, I marveled at the beauty of the palace. It had pure white walls, and a white light that emanated from behind the throne. Tall Grecian columns supported the half roof, which stood open to a vibrant green forest at the end of the hall. White stairs led up to the throne of the King of the faeries. He was an older-looking man with long golden hair, who carried a rod with a vine that wound up it and a spray of white roses in full bloom at one end.
I stood to the left of the king, about twelve steps beneath him behind another human girl close to the same age as me. On the other side of the stairs, standing in a line that led up to the king as well, were his children. The many princes and princesses the fae king had with his late queen. Many princes and princesses. The line of royal children actually led out of the building. I wasn’t certain how many children he had, but it was very possibly in the hundreds. The faeries were supposed to live for a very long time.
I glanced over at the fae people standing on the other side, glowing, and fuzzy around the edges like something perfectly beautiful out of a dream, and one of the princes met my eyes. Farron. The second oldest son. He was tall, lithe, and pale, with dark hair and cold blue eyes.
Oh, God no, I don’t want him to see me looking at him. I tried my best to pretend I hadn’t noticed his gaze. He was never very friendly. Always skulking around, turning his back to me when I was talking to Bronn, his oldest brother. I had been brought here to marry Bronn. I was gift from my parents.
I was promised to the Fae King as a bride to his son since the day I was born. It was the magic of the faeries that had helped my parents conceive, they raised me until I was seventeen and then the bargain came due. I was collected by a small entourage of fae during a celebration feast at my parents’ house deep in the woods.
When I looked up again, Farron was listening intently to his father’s words, as was Bronn, who stood tall and muscular with shining blond hair like his father’s and a kind smile. Marrying Bronn wouldn’t really be so bad, but I was feeling pretty moody myself, truth be told. I was missing my friends, my pets, and even Tom Hiddleston’s twitter updates.
I sighed.
Weaning myself from texting was killing me. I missed my parents too, except I hated them at that moment. I really couldn’t believe they had traded off seventeen years of life with me for my personal freedom. I guess I was lucky the fae weren’t interested in grinding my bones for bread; my parents wouldn’t have known either way. Where’s Child Protective when you need them?
Anyhow, there I was waiting in the Court of the Fae in this flowing purple gown, my long hair curled and dressed with tiny flowers. I looked like I’d just walked out of some sort of Victorian painting. It was just me and nineteen other girls—Bronn’s prospective brides. I wasn’t certain how this was going to work exactly. Did Bronn get to choose? Or if we would all end up being his brides? That would really top the list of crappy things that had happened to me in…hmm…I can’t exactly remember—one day just seemed to merge into another here in the beauty of the Faeryland. Perhaps a month? Yes, a month seemed plausible.
A month of waiting on Bronn.
“Etta.”
I startled as I heard my name. In the Seelie Court it was probably a good idea to listen to what was being said, but oh, it seemed to go on forever.
The king looked at me.
I stepped out of the line of human girls and stood before him.
“Etta…” he said, pointing the rod at the line of royal children, “goes to Farron. That is my decision.”ama
Farron?! I think I actually turned and looked at the prince in horror. Probably not my most gracious moment ever.
Farron’s mouth was open as if he meant to argue but he didn’t. Instead he bolted, running down the steps and out the back into the forest. He never even looked at me.

Be the first to review “To Wed the Fae Prince by V. Vervain” Cancel reply