You are here: Products To Have and To Chastise: A Victorian Marriage of Convenience Romance by Cherry Redde 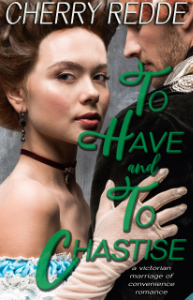 To Have and To Chastise: A Victorian Marriage of Convenience Romance by Cherry Redde

A Victorian lady’s marriage of convenience to a strict stranger…
When her wastrel Earl of a father gambles away her hand in marriage, the beautiful Lady Henrietta claims she’s already secretly wed to the handsome vicar who arrived in the county just that day. To protect the lady’s reputation, Alfred Conley backs up the story in public― but he exacts his price in private. Any wife of his must be subject to domestic discipline, and he does not tolerate lies.

Especially those lies that encumber him with a surprise bride still being claimed by a powerful enemy.

“If the Earl is misplaced, I suppose you'd better go find him,” she said. Did Joey really need Henrietta to give him express permission? “Mr. Conley has just arrived for tea, and he will be thinking I'm most frightfully rude if I abandon him to face the cucumber sandwiches entirely alone.”
Alfred Conley was the new vicar. He'd barely had time to present himself at the front door before Joey started pounding on the servant's entrance.
“But…” The sight of Henrietta's delicate boots peeping out from beneath her skirt― for Joey dared look no higher― had reduced him to a puddle of nerves.
It was intolerable. The only servants left at Peregrine Castle were a brace of stammering children.
When she'd heard Joey's first knock, Henrietta had raised her eyes from the silver tea service to that other stammering child, a spotty fourteen-year-old parlor-maid. “Winnie?” The word was more of a wistful hope than a serious demand.
Winnie's cheeks flushed to match the scarlet of the spots. “Lady! It would be most improper.”
Somehow, Henrietta had always known this would be Winnie's response. The little ninny was too busy acting the chaperone to play the part of the missing butler. Her small-minded country soul wouldn't let her leave an Earl's daughter alone with a male person for even the brief moment of time it would take to answer the door.
The male person in question smirked behind his bone china teacup. Vicars had a keen sense of class. Conley had already noticed there was no real butler conveniently to hand.
Very well. Poor Henrietta needs must see who came calling for herself.
It should have been the work of a moment to send away the silly boy. The longer they talked, the more the tips of Joey's ears turned various shades of pink. “Miss… m'lady… the Earl… um… m'lord… He might need the black bag, m'lady.”
So she was to play doctor as well as butler. Henrietta sighed again. Honestly. The Earl's hurts would be cushioned by the amount of drink he'd consumed. Why couldn't Mrs. Page be here to cope with all the little interruptions?
Alas, the housekeeper had departed for a new position at Powdersham Castle. As had the butler. A dispute about the late payment of certain wages.
At this inopportune moment, the new vicar emerged into the sunlight. “What seems to be the problem, my lady?” The words were proper enough, but his tone disquieted Henrietta.
His tone and the slight lift of his ginger right eyebrow.
For Mr. Alfred Conley was a redhead, which somehow seemed not quite the thing for a vicar. Redheaded men had such terrible tempers. Their nature came not from the heavens but from more southerly regions.
“My father the Earl.” She intended to say more but found she couldn't complete the sentence. The vicar's piercing blue eyes taunted her with a near-insolent directness. And― could she possibly be imagining it?― the right corner of his well-cut mouth twitched in obvious amusement.
No. She imagined nothing. She saw exactly what she saw.
Never had a man looked less like a vicar. Tall and lean, he seemed more a music-hall version of a young rake. Those proud shoulders were a little too wide and a little too thrown-back to suggest a man who spent long hours hunched over the composition of a sermon. The thighs, in particular, were a bit too sturdy where they strained against his well-cut wool trousers.
A vicar of two-and-twenty!
Whoever heard of such a thing? And a vicar should be married. Oh, she'd put a flea in her father's ear about the whole matter even before she'd had the dubious honor of meeting Mr. Conley in the flesh. Nothing about those glinting eyes or smirking mouth was going to change her mind.
The Earl, as always, overruled his nineteen-year-old daughter. He'd made a sharp comment about the cost of the vicarage and how it was cheaper to keep a man without a family.
And so here they were in a fine pickle indeed. Henrietta was surrounded by inexperience, incompetence, and insolence on all sides. She supposed she would have to take charge. That was what Joey and Winnie expected, after all.
Who knew what this too-handsome-for-his-own-good Mr. Alfred Conley might expect?

Be the first to review “To Have and To Chastise: A Victorian Marriage of Convenience Romance by Cherry Redde” Cancel reply