You are here: Products Tiny Glitches by Rebecca Chastain 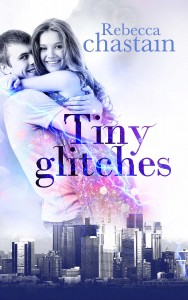 Life isn’t exactly normal for Eva Parker: the stronger Eva’s emotions, the faster nearby electrical devices die. Eva can’t have a cell phone, use a computer, or be in a car for more than a few minutes without killing it. Dealing with her electricity-killing curse makes living in modern-day Los Angeles complicated enough for Eva—and that was before she was blackmailed into hiding a stolen baby elephant and partnered with Hudson, a sexy electrical engineer Eva just met.

Dodging repeated attempts on her life made by ruthless corporations hunting the elephant is easier for Eva than quelling her growing affection for Hudson, and while protecting an elephant is hard, controlling her curse is a lot harder. However, Eva must do both, because if she lets her emotions free and falls in love with Hudson, neither of them will survive.

Rebecca Chastain is the international bestselling author of the humorous Madison Fox, Illuminant Enforcer urban fantasy series and the highly praised MAGIC OF THE GARGOYLES fantasy novella. She has found seven four-leaf clovers to date, won a purebred Arabian horse in a drawing, and once tamed a blackbird for a day. Dreaming up the absurd and writing stories designed to amuse and entertain has been her passion since she was eleven years old. She lives in Northern California with her wonderful husband and two bossy cats. TINY GLITCHES is her latest release. Sign up for Rebecca’s newsletter at http://www.rebeccachastain.com/newsletter/.

I fell in love with screwball comedies in college, and short of a few early Janet Evanovich novels (not her Stephanie Plum series), I wasn’t finding many in literary form . . . so I decided to write my own. Tiny Glitches is a whirlwind adventure full of romance and danger—and a touch of magic, because every story deserves a little magic. In this instance, I used the magic as a form of torture for Eva, giving her a curse that drains electricity in a world where everyone is glued to their phones and communication is becoming increasingly electronics driven. The novel is a hybrid romance/adventure/suspense that readers have repeatedly praised as laugh-out-loud funny and nonstop action.