You are here: Products Till Death and Beyond by Angie Skelhorn 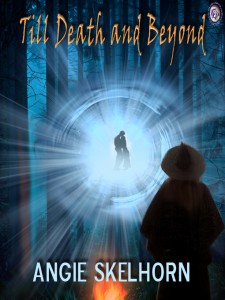 Till Death and Beyond by Angie Skelhorn

Till Death and Beyond opens with a teenage girl named Zoe, inexperienced in witchcraft, in the woods on a Full Moon cast a spell for a love she feels is lost to her. The teenager new to magic, is careless of her words for her desire. The spirit of a maiden witch appears. At first the teenager is afraid of the ghostly figure, and then her curiosity calms her nerves.

The Spirit tells the tale how she and the love of her life were separated by ignorance. Zoe, the teenage girl experiments with magic to reunite the Spirit with her long lost love.

I signed my ebook deal with Club Lighthouse Publishing. My ebook On The Edge, was released September 7, 2010 and No Reins on October 31, 2010. My third ebook Till Death and Beyond was released April 3, 2011. My newest release Severed Ties – Publisher, Damnation Books- book launch December 1, 2012.

I had a very specific idea in mind when I wrote Till Death and Beyond a love story between Emery a Puritan and Frye a witch and the petty rivalry connecting the two faith driven neighbors. The main conflict between the Puritans and the witches’ faith is the the theme of the romantic story. I wanted to tell the important elements that are in the traditions and of the similarities and difference among them. I hope to say to the reader the story isn’t strictly romantic; it will have some history.