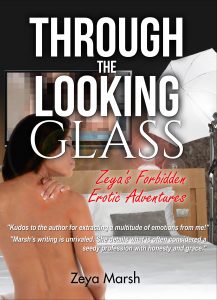 Some of her members – men who bought private shows – suggested she write a novel to give people an idea of what life is like for a cam model in a Romania sex studio. That’s how her book was born. Zeya has since moved on from the studio, found a boyfriend and is pursuing her dream of getting married, raising a family, and opening her own veterinary practice in Bucharest.

I wanted to tell people what my life, the life of a cam model, is all about. How the men fall in love with me, even though they can’t touch and are thousands of kilometers away.

“Toy!” Zander typed. “I want you to use a toy.”
Zander frowned as I stared at his image on the cam. His lips were pinched, his face was red, and his brow was furrowed. He reminded me of a petulant little boy whose mother refused to buy him a piece of candy at the store.
“Zander,” I replied. “You know I don’t use toys. I never have and never will. I don’t want a plastic thing inside me.”
“Please,” Zander typed in reply. “Please.”
Zander was getting on my nerves. I glared at him to warn him that he’d better stop.
“I want you to use a toy!”
“Zander,” I warned. “What happened the last time?”
“You banned me for two weeks.”
“Exactly. So knock it off. You’re annoying me. And you know what happens when I get annoyed.”
Zander glanced down at his hands, his eyes avoiding mine.
“Yes, mistress,” Zander typed. “Please don’t ban me.”
“Then shut the fuck up,” I told him. “I have twenty minutes left before my shift ends, you piece of shit. Don’t say a word. I’m going to do my nails.”
Zander smiled and looked into the cam. His lips relaxed, the frown disappeared, and his color returned to normal. I allowed myself a small smile. I knew what he liked.
“Yes, mistress,” Zander typed. “Thank you, mistress.”
“That’s a good boy,” I replied, pitching my voice so it was full of loathing and venom. Zander smiled, and I could see his shoulders moving. His hand was busy, and I knew what he was doing even though I couldn’t see the details on the cam.
I disliked him, this little man who needed to be scolded and belittled. Not for the first time, I wondered what kind of wife would put up with this poor excuse for a human being. However, compared to some of my members, he was tame as a puppy. And besides, he was paying for my time.
For the next twenty minutes, Zander watched me from thousands of miles away, glued to his computer monitor. His breathing became more rapid as he watched me do my nails, and the movement of his arm became frantic. Just before his time was up, he closed his eyes, and his shoulders sagged. He took a deep breath, moaned a few times, and smiled.
“Time is up, Zander,” I said after sanding the last nail to perfection. I held up my hands so he could see all ten fingers. “You like my nails?”
“I like everything about you, mistress,” Zander typed. He was a little out of breath but appeared satisfied.
I smiled at him. In my mind, it was the same kind of smile that a shark gives to its prey before going for the kill. Since I was playing the part of a dominatrix, the evil smile was appropriate.
“Zander!” I said. “Be here at the usual time tomorrow. Don’t be late.” I turned off the webcam before he could say anything else.
Zander, one of my most reliable members, had just paid $2.99 a minute to watch me, his mistress, do my nails while he masturbated under the table. His needs were simple, and he didn’t make very many demands on me, although I found him detestable. He never even asked me to take my clothes off, and I never saw him naked. He just wanted me to degrade him for twenty minutes while he pleasured himself, positioned so I could not see what he was doing. I guess it takes all kinds.
I was exhausted. It had been a long day: eight hours of pervs and creeps, the usual nice members, and more than a few trolls. I sat on the edge of the bed, closed my eyes, and breathed deeply, letting the tension flow out of my body. After a couple of minutes, the feeling of stress and tension passed and I felt my body relax. I took a few more deep breaths and shoved the evil thoughts away.
This room had been my second home for the last nine months. One wall, the one I was facing, was plain white with no decoration of any kind except for two silver umbrellas that focused their bright lights towards the rest of the room. Lighting was crucial so that the clients could see everything they wanted to see. Strategically placed lights throughout the room eliminated any shadows and could be moved or dimmed as needed to change the mood.
The main webcam—we call them cams—rested on a tripod standing between the two umbrellas, and pointed straight at me while I was sitting on edge of the bed. To my right was a floor-to-ceiling mirror, and to my left was some open space to dance. A stripper pole to one side of that open space could be used to enhance certain types of fantasies. The cam could be turned in any direction using a remote control, and another remote allowed me to zoom as far or as close as needed.
On the other side of the stripper pole was a door leading to a shower. Some clients enjoyed watching a naked girl play with herself in the water. A second cam, with another umbrella and light, was pointed in that direction so that everything going on in there could be seen.
Before you get the wrong idea, the restroom is off-limits. That kind of perversion is not allowed. In fact, a girl would be fired if she showed bathroom activities on cam. The studio is very strict about that. Even in the world of camming there is some sense of privacy and decency.