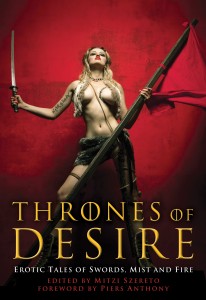 Thrones of Desire is a place where lust and legend abound, and adventure, passion and danger entwine. Think mystical lands and creatures, kings and queens, knights and renegades, heroes and villains, warlords, maidens and princesses. Think battles and danger, honor and dishonor, good and evil. Most of all, think hearts filled with passion and secret desire. This is a place where romantic chivalry is alive and well, but so too is romantic wickedness. This is a place where the good do not always win, and the bad are often more captivating and desirable than their altruistic counterparts. In these lush and timeless landscapes, the battle for flesh can be as important as the battle for power. Intrigue, sorcery, revenge, lawlessness, dark secrets and mysterious elixirs; entanglements with supernatural beings — everything is possible in these magical mythical landscapes. Inspired by Game of Thrones these imaginative steamy tales transport the reader to fantastical realms. Featuring a special foreword from legendary fantasy author Piers Anthony.

My inspiration came from the successful blend of epic fantasy with sexy content as seen in the hit TV series “Game of Thrones.” I wanted to aim fantasy at the adult reader who expects something with a bit more steam than one usually finds in the genre.