You are here: Products Thou Shalt Love by Sianah Nalika DeShield 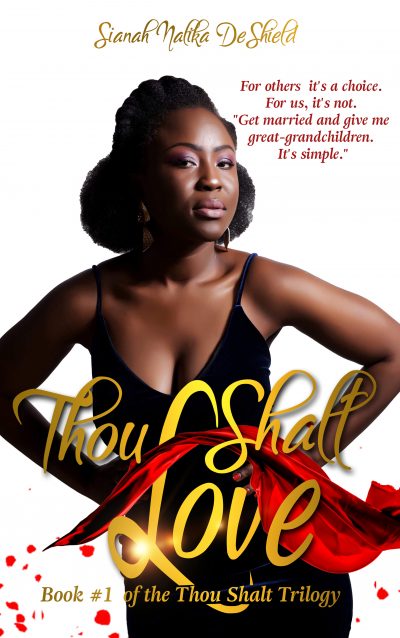 Sisters of spirit and grown women, Susan and Mildred are reunited under the roof of their grandmother, Louise, where family and love always prosper. Yet, in their personal lives, Susan and Mildred find themselves unlucky in love time and again. Separately, they discover that keeping secrets from one another is a lonely journey, which ends in heartache. Only when they realize that they must face life’s challenges together do they see that they can survive, them against the world.

In a trilogy about growth and personal discovery, Susan and Mildred will navigate the winding roads of life side by side, contending with great change and learning that they must love, trust, and forgive, no matter what comes their way.

No stranger to the world of words, Sianah Nalika DeShield has utilized her passion and affinity for writing to empower others and advocate for a better world. Having found a love of writing at an early age, Sianah once dreamed of taking her talents to the world. With an early focus on literature, language, English, and history, her skills developed as a base from which she would launch into socio-political advocacy and beyond.

In her beloved home of Liberia, the author found a discrepancy in not only a lack of writers in her country but of unequal opportunities for young people. Her desire to work with youth and advocate for her homeland, She pursued political science as an undergraduate degree at the United Methodist University. Her time spent as a freshman and sophomore class representative not only led her to an appointment to the Liberia National Students Union (LINSU) but also afforded her the opportunity to experience first hand the dire need for young people in Liberia. Working in the social sciences opened the door for Sianah to help others, promote advocacy, and utilize her writing skills to effect change.

With no interest in slowing down, the author went on to pursue a career in Administration. Her skills led her from Liberia to Ghana as a 2014 MILEAD Fellow and then on to Cyprus where she pursued a Masters Degree in International Relations at the Eastern Mediterranean University. It is then that she refocused her personal and professional goals back to the world of creative writing and married her love of language, advocacy, and international relations in a foundation where she can mentor young writers in her home country.

Once the creative dreamer with the hopes of best seller- lists, Sianah has developed her skills around a lifelong passion for social change and creative development. Now she is dedicated to creating opportunities for young writers in Liberia that she did not have. Still, as passionate as ever about her own writing, the author can now add novelist to her long list of accomplishments and hopes to become one of the most prolific writers Africa has ever known.

I was inspired to write Thou Shalt Love due to some personal problems in my life. Writing about strong female characters like the Carter girls helped me get through tough times.