You are here: Products Thorns: A Gay Historical Romance by Alyssa Belivet 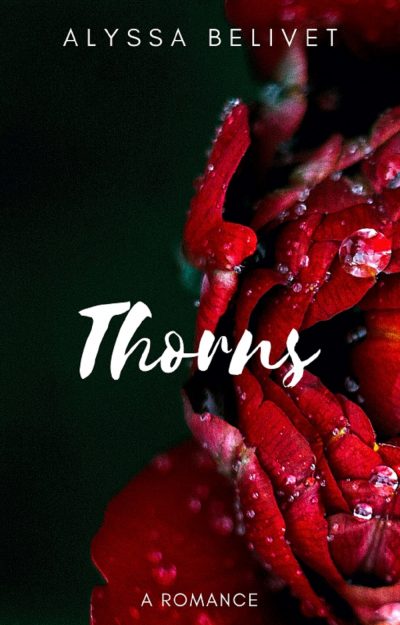 Thomas has nowhere left to turn. Unable to pay the rent after his father’s crops fail, he throws himself on the mercy of the mysterious aristocrat Lord Ashton. His lordship proposes a bargain that will tear him away from everything he knows and make him a servant in Ashton’s sprawling manor. As Thomas settles into his strange new role, a contest of wills between him and his master soon becomes a dance of seduction.

Ensnared in a world of privilege, power, and dark desire, Thomas soon realizes he’s traded a life of toil for a gilded cage—one he’s not sure he wants to escape.

I was interested in writing about the power dynamics between masters and servants in the Regency period–especially behind closed doors.

Thomas had never been this close to the manor house. Until today, it had always been a distant hulk of elegant white stone looming just at the periphery of his vision, a cloud at the edge of his mind. How strange that in all his twenty-two years, he had never even come close enough to peer through the windows of the man who owned the land his father farmed. The lord who held their livelihood in his hands.

The lawn leading up to the stately edifice was manicured and alarmingly green. Two sculpted topiaries stood sentry on either side of the beveled glass windows that outlined the door. He knew the man who would have trimmed them just this morning, Hodgson the gardener. Only last week they had shared a pint in the village, and he’d wanted so desperately to ask what it was like to work at the manor house.

He wanted to know what kind of man his lordship was.

Thomas ran a hand through his windblown blond hair to get it out of his eyes, then frowned at the fraying state of his frock coat’s cuffs. With a clipped sigh, he raised the heavy iron knocker and let it fall with a resonating clang. An elderly footman in powder blue house livery opened the creaking door, regarding Thomas as he would an insect.

“I’ve an appointment with his lordship, sir. My name is Thomas Ebbing.”

The servant looked him up and down, skeptical. “Are you quite certain of that?”

“As certain as can be, if you’ll pardon me.”

“Very well.” Grudgingly, he stepped aside. “You may wait in the entrance hall. Don’t touch anything.”

Thomas wiped his feet judiciously and crossed the threshold. Inside, the corridor smelled of polished wood and candle wax, not unlike a church. It was dimly lit, with only the overcast light filtering in through the front windows. A red carpet with a design of curling gold leaves softened his footsteps. He felt intensely out of place among all these beautiful things.

Thomas spun around at the deep, rich tone. This was not the insinuating voice of the footman. It belonged to a man perhaps a dozen years older than Thomas and a few inches taller, with ash-brown hair neatly cropped and threaded with silver at the temples. His face seemed carved from stone, the chin and cheekbones elegantly stark, with a sharp, straight nose and a mouth like a chiseled saint’s. He wore a loose white shirt and muddied riding boots with trousers of brown suede.

He said: “I’m afraid you caught me just in from a ride.”

“You mean—” Thomas gasped, feeling his face go hot with an excruciating blush. “Oh, your lordship. Forgive me.” He clasped his hands together and bowed awkwardly at the waist. “I didn’t know.”

“Nonsense, Ebbing. Why should you know?” Lord Ashton gave a ready smile, gesturing for him to follow. His eyes were the slightly reddish brown of cherry wood, and they radiated good humor born of a lifetime of command.

“I’m sorry to disturb your lordship’s leisure hours like this,” said Thomas to fill the silence. “I should not have imposed upon you if it were not of the utmost importance.”

“But of course.” Lord Ashton led him to a sitting room with two ornately carved wingbacked armchairs and bade him to sit. “A nobleman’s fortune rests on the happiness of his tenants.” He called for tea. “Besides, most of my hours are leisure hours, to be perfectly honest.” He chuckled, and Thomas agonized over whether he was meant to laugh along. He didn’t.

Be the first to review “Thorns: A Gay Historical Romance by Alyssa Belivet” Cancel reply