You are here: Products Thirty Something (Nothing’s how we dreamed it would be) by Filipa Fonseca Silva 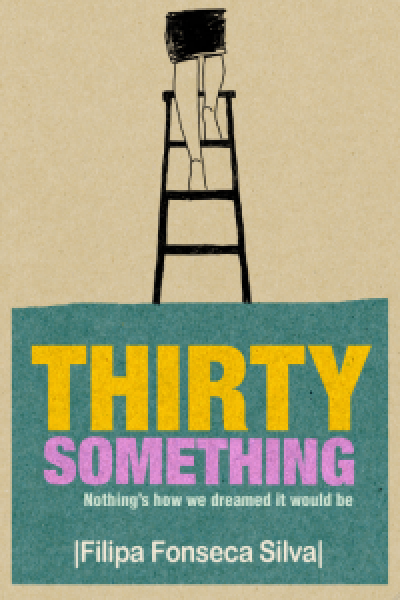 Joana is a conservative, controlling woman who expected much more from marriage; Maria is trying to get back on her feet after being dumped just before her wedding; Filipe hides his broken heart in failed relationships. Is this as good as it gets when you’re thirty something? That’s what these three friends from college times will find out during a dysfunctional dinner party. Because life is not always how we dreamed it would be.

Thirty Something (Nothing’s How We Dreamed It Would Be) is her first novel and the original version published in Portugal, has been widely praised.

In my book I show how a group of friends, that are so different and have taken diverse paths in life, come together over dinner and how each one reflects on how different their lives are now.

My earliest memory is of a Christmas tree. I know now it was a Christmas tree, that is: but all I saw at the time was this thing full of colours and shapes, bathed in a yellowish light. I think I was sitting in a pushchair, strapped in. And although I can remember exactly what I wanted to say (‘Look, mummy, how lovely’), I couldn’t speak yet. It was the same feeling as being in a dream and wanting to shout and not being able to. All I could manage, therefore, was a few unintelligible noises. That was the day I learned what it means to be misunderstood.
All the rest ended up being more of the same. My drawings at nursery school of a homeless man sleeping in the garden that the teachers insisted was the Baby Jesus in his manger; or the times I’d carry Patrícia’s satchel for three full blocks, not because I liked her but just to see her Mother, who was waiting for her at the entrance to the building and plumped my cheeks with her smooth hands with their red fingernails and vanilla scent.
Poor Patrícia… In eighth grade, after five years of a kind of Platonic love affair that had lasted through our childhood and puberty, she said ‘All right, you can kiss me, but no tongues’ and I rejected her. Obviously I didn’t tell her why I’d rejected her: I had to make up a story about having a sore throat and maybe she’d catch it and then I ran off home, to masturbate thinking about Mother. In the following weeks I played football every day after classes, and when winter started and there were no more games I began to go out with Rita, a girl who was far from pretty but had well developed breasts for a thirteen-year-old. Patrícia was heartbroken. Now I could no longer see Mother and was stuck with an ugly girlfriend who gave kisses with her stiff, rasping tongue that lasted five painful minutes. Worse still, when I wanted to end it for the good of my neck she let me move up to level two – feel her tits, in other words. This made me keep the romance going for another few months and learned what it was like to have a permanently numb neck. I should have understood there and then that 1) no matter how small they are, lies only lead to trouble and 2) my future with women was hardly going to be brilliant.
Now I’d destroyed my reputation with the girls at school, I had to take refuge in grunge music and literature to survive my adolescence. Naturally I went to parties, and pretended to enjoy myself as we smoked in matinées or played footsie under tables. I had friends, and I even considered myself to be fairly outgoing, but it was in my room that I felt best. I read, wrote, composed dumb melodies on my guitar and fantasised about Liv Tyler in the Aerosmith video, or Vanessa Paradis, or – in a filthier way – Pamela Anderson. While the other kids smoked hashish and drank shots of absinthe in their pursuit of ‘different experiences’, I preferred to question the version of reality they presented us with every day in the classroom. Political systems riven by corruption, Catholicism’s subjugation of the intellect, the economic interests that lay behind wars. Unfortunately I didn’t have many people to discuss these questions with. Some teachers actually liked the issues I’d raise, but most just wanted to get things out of the way without bothering to question them. Which is what nearly everyone I know still does.
The only important thing that happened in my adolescence was Bé. I met her on a night in August, during a meteor shower. I was in my family’s holiday villa with my grandparents and cousins, who were younger than me. I decided to go and sleep on the beach to get a good view of the meteor shower far from the lights of town. I grabbed my sleeping bag, took enough food for three days, a torch, my notebook and my Walkman. I was lying on my back listening to “Polly” when Bé appeared above me and said something I couldn’t make out. She could have been shouting for all I cared: at that moment the world had stopped for me and all I saw was her pink lips, moving slowly.