You are here: Products These Lies She Tells by C.L. Perry 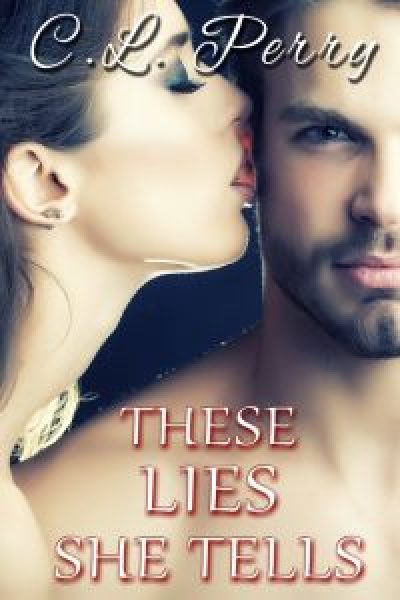 These Lies She Tells by C.L. Perry

I was startled when the woman from the supermarket threw open the door to the home, the wind grabbing at it and slamming it against its own hinges. She fought to close it, using her entire body weight to pull the door back, and then stepped inside. A scowl was on her face as she plucked her trousers from her thighs and cowboy walked towards the hallway closet.
“You’re wet,” I said. I couldn’t help but smirk as the bedraggled mess jolted with fright.
“It’s raining,” she said, not even bothering to look at me. “Excuse me, you’re blocking my way.” She sidestepped me, slipping past me in the narrow hallway. Drops of water followed her path on the tiled floor.
“There’s a closet over there with towels,” I said, pointing it out to her.
“I’m aware of that.”
She took her coat off and let it drop to the floor. Grabbing a white fluffy towel from the closet, she wrapped it around her hair. She took a second towel and buried her face into it, letting out an exasperated groan. Whether that was aimed at me or was just a general expression of exasperation, I didn’t know. It was cute though.
I walked over to her sopping coat, picking it up from the floor while she continued burying her face in a towel. “Are you visiting someone?” I asked, hanging her coat from a hook above the hallway radiator.
“No, I work here. Why are you here? Are you following me?”
I frowned then laughed. “No. How can I be following you when I got here first?”
She didn’t answer the question and instead just stood there in the middle of the hallway staring at me. As she kept me fixed in her gaze, my earlier mirth at her question faded away. Her question was more accusatory than joking. She really thought I was following her? Jeez, you can help a stranger one week and then a few weeks later they’re accusing you of stalking them.
Irritated, I wondered for the millionth time why I’d even bothered showing my face in this town again.
“So what, you got fired from the store or something? Got another customer you couldn’t handle and nobody was there to save you?” I taunted her.
Her eyes narrowed. “No.”
“Not very talkative are you?”
“Well, you’re not saying much that’s interesting,” she shrugged.
“You’re cold.” I meant her attitude but even as I said it, my eyes were running up and down her body, taking in her shivering that I hadn’t noticed before.
She followed my eyes and looked down at her body, suddenly noticing that her nipples were like bullets against the thin fabric of her blouse. A horrified expression came over her face and she held her forearms against her chest, hiding her breasts beneath them. Her eyes met mine, anger burning in them.
“I don’t even know you yet you’re making lewd comments like that?” Her voice was like ice but her stare was full of fire. “I guess I shouldn’t be surprised though given the rumours about you.”
Immediately I wondered what specific rumours she was referring to and then realised that it didn’t really matter. I could take an educated guess because I’d heard so many variations, all with the same theme. Here was a woman I had met once before yet she knew me by reputation alone thanks to the power of gossip. I should have stayed away from this town so that I could be Tate, the man with a past of his own creation, instead of Tate, the man with the past that everyone talked about.
It never did me any good to fight back and clear my name, especially since popular opinion had judged me guilty for all my rumoured sins, so I addressed the misunderstanding instead.
“You’re shivering and that’s why I said you were cold, not for any other reason despite what you might think.” I paused before adding, “Plus you were coming across like an ice-cold bitch when I was just trying to make pleasant conversation with you.”
I wished I could take back my words. Her face fell at the mention of her being a ‘bitch.’ I was being honest but I could admit to myself that I had been deliberately rude to her to try and rile her up. I’d played a huge part in her attitude tonight.
Softening, I took my sweater off and held it out to her. “Here… a peace offering.” It was a royal blue tight-knit that my grandmother had made for my grandfather years ago, the only item of theirs that I’d been able to keep after they died. My parents had the rest of ‘their tat’ discarded by the house clearance company they’d hired when they knew I was out of town and couldn’t stop them. It was just a simple sweater yet to me it was more than that.
She hesitated only for a second before taking it and putting it on.
“Thanks. I’ll get this back to you,” she said, gesturing at the sweater that was swamping her petite body.
Without another word, she turned on her heel and walked down the corridor. I watched her leave, my attention drawn to her. Maybe it was the way the sweater clung to her feminine hips that swayed as she walked. Or maybe it was because, since I’d arrived back in this town months ago, she was the first person that I’d had a real conversation with.

Be the first to review “These Lies She Tells by C.L. Perry” Cancel reply