You are here: Products Theodore Hartley by E.H. Nolan 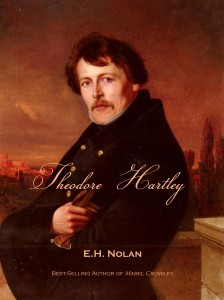 E.H. Nolan brings back the most beloved character from her Amazon best-selling debut in this sequel to “Mabel Crowley”.

Handsome, brilliant, charming, and a millionaire, Theodore Hartley is the most sought after man in all England. At thirty-nine, Theodore is confident that that he will never settle down, until he meets the beautiful and intriguing sixteen-year-old Alice Ingleson.

Four decades of Mabel’s life was recorded in “Mabel Crowley”, but hers wasn’t the only intriguing narrative. Dozens of characters, all struggling with their own hopes and hardships, mingled and crossed paths with Mabel throughout the years. Enter a world thirty years before Mabel Crowley, a time when Theodore Hartley was a young man in search of his destiny.

My debut novel “Mabel Crowley” featured Theodore Hartley as one of the supporting characters. Since Theodore was always one of my favorites from the original book, I wanted to give him his own book!

Be the first to review “Theodore Hartley by E.H. Nolan” Cancel reply