You are here: Products The Wyld: A Reverse Harem Fantasy by Parker de Vesci 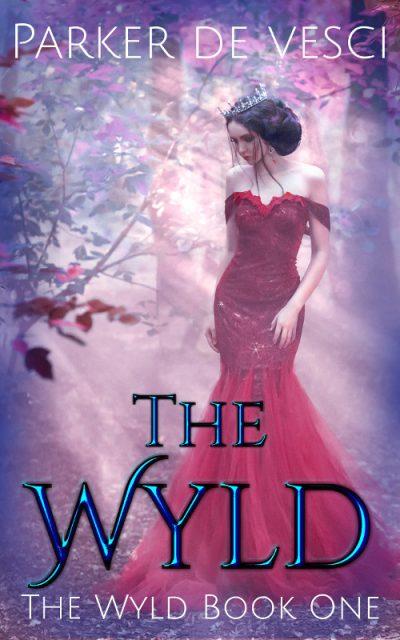 The Wyld: A Reverse Harem Fantasy by Parker de Vesci

Alex is rescued by three gorgeous shifters who claim she’s the reincarnation of their empress. They’re determined to restore her throne. But her situation is more perilous than she knows. Her three warriors’ hearts are full of secrets. And a devastatingly handsome immortal prince is hunting her with the intent to kill her permanently. Slow burn RH.

Jess kept his eyes on the building in front of him, feigning hesitation. Below him, the bike rumbled. He could hear her footsteps, splashing as she crossed the street. He’d been waiting for her, but he didn’t want her to know that.

None of that did any justice to the lithe little package that moved its way across the street toward him. He’d been knocked senseless by her beauty, blindsided by his immediate attraction to her. He had to admit, sometimes this hunt could be fun.

Her footsteps stopped beside the bike and he turned his face toward her, raising his eyebrows in false surprise. He blinked a couple of times for good measure, then beamed a killer smile at her. “Hey, it’s you.”

She smiled back, hands tucked in her pockets. She was beautiful, even sopping wet. Especially sopping wet. He could think of a few scenarios in which he would like to— He shook away the thoughts racing away with him and gave her a puzzled frown. “What are you doing out in the rain?”

“Just going for a stroll.” She shrugged, still smiling.

He scanned over her again. On second perusal, she looked a little roughed up. There were scrapes on her arm, her jaw.

“What are you up to?” she asked, before he could say anything else.

He shrugged back at her, grinned. “Just going for a ride.”

She laughed, and her laughter was as soft as the wind over the meadows of High Shelar.

They looked at each other over a moment of awkward silence, then he dove in and asked, “You wanna come with me?”

Her eyes lingered over his bike, then glanced at the sky. It was a terrible night for a ride. He should have invited her somewhere else. Anywhere else.

“Sure,” she said, then laughed again. “I don’t suppose I can get much wetter.”

His cock awakened at the phrase. He started to imagine just how wet she was, and he was burning inside. He wanted to reach out, then, and touch her. He hoped desperately in that moment that she wasn’t the one. That he could investigate, and have a hell of a lot of fun investigating, and leave her in the end. He sucked in a breath, tried to get control of his body, and nodded casually over his shoulder. “Hop on.”

She swung her leg up over the back of the bike and slid up behind him. Her arms laced around his stomach, making him clench at the touch of her. She felt cold and wet, pressed up behind him. He wanted to warm her up. To stop her shivering. To make her shiver in a different way.

He pulled the bike away from the curb, revved the motor, and they sped away into the night.

Jess drove the city streets for a while, trying to think of somewhere to take her. He should have rented an apartment, but he hadn’t. Now he cursed himself for that oversight. It would have been nice to take her someplace warm. Anywhere public was out of the question. This wasn’t a date. He was on a mission. It had taken a long, long time to track this one down. Now, tonight, he was going to find out if it was her. He was done waiting for it. And he was done waiting to get his hands on her.

He drove out past the edge of town, where he knew of an abandoned warehouse that was too far out to draw much in the way of occupation. It wasn’t exactly romantic, but it would keep the rain off. He pulled up to the broken window, swung off the bike, and took her hand. “Come on.”

Alex glanced around, looking a little nervous, but climbed off the bike and went with him. They stepped through the window and into the hollow, dark space inside.

She gave him a funny look, the light from the window shining on half her face.

He needed an explanation, quick. “Uh… my roommate has his girl over. They were… you know.”

She nodded understanding, wrapped her arms around herself, and took a couple of steps into the darkness, her eyes exploring the black corners she couldn’t see into.

“Don’t worry. No one ever comes here.” He moved further in, as if to prove that it was safe, then came back to her. He put his hands on her arms. Her skin was cold as a corpse. “Aw, you’re freezing,” he murmured. He was glad for the excuse to rub his hands up and down her arms. And even gladder to pull her toward him. “Come here. Let me warm you.”

She gave in, let him pull her close, probably thankful for any warmth he could give her. Her teeth were chattering. He placed one hand on the back of her head and pulled her cheek against his chest, enveloping her in his embrace. She smelled like rain. She was like ice against him. His heart caved a little, pitying her. He lowered his face, let his nose touch her forehead. “I’ll warm you,” he said again. And it was stupid to do it, stupid to expose himself at all, but he opened up a tiny fraction of his sunsoul and let the heat sink into her.

She sighed and melted against him. Her eyes sunk closed, jaw went slack. She stopped shivering. She was literally like putty in his hands.

Jess looked down at her, at her face adrift in utter relaxation. The relief in her expression. The innocence. He was sure she was the most stunning creature he had ever seen, and he wanted her like he had never wanted anything before. But the realization of that turned his core to ice. Something inside him knew. No mortal being could possibly affect him in this way. This was her. It had to be her.

He almost snapped her neck right then.

Be the first to review “The Wyld: A Reverse Harem Fantasy by Parker de Vesci” Cancel reply