You are here: Products The Wolf, Seductive Burglar by A.S. Peavey 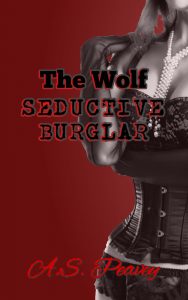 There is one thief whose moniker haunts the halls of detective agencies: the Wolf. How she manages to sneak in without being caught, and exit with riches, paintings, and so much more—while leaving no traces—baffles investigators No one even knows what she looks like.

Until Detective Fowler received a tip.

Now, Fowler is going undercover to trick the Wolf into revealing tales of her exploits. He will seduce her, until, in the throes of passion, she trusts him with her dirty secrets, and tells all.

But this is a dangerous game. The Wolf was named for her cunning. She too knows the power of sex—as her stories of past burglaries quickly reveal. If he is not careful, Fowler may be the one caught out. He will have to keep his mind clear, even as both her body and her tales of seducing the rich and powerful, of making love to men and women—sometimes both at once—employ his libido to distract him.

If he doesn’t catch her now, she will disappear into the wind.

A.S. Peavey began writing erotica in a micro caption-based form (which you can check out on Tumblr), before branching to explore the world of longer form stories and novels. Peavey is excited by the opportunities offered to expand on those shorter stories, and grasp what tugs at the libido. Peavey lives along the Rocky Mountains, going out to hike and bike when time and the weather allow.

I enjoy writing erotica, but I was having trouble finding my niche, until it occurred to me to add a little mystery. It seems like every genre I try to write in I add a mystery element, but for some reason it took a while to realize I could do that with erotica. I’ve never actually tried my hand at straight mystery, but it is one of my favorite genres to read. At the time I was reading a volume of Arsene Lupin (A gentleman burglar, and France’s answer to Sherlock Holmes) and it occurred to me that a similar character, one who uses seduction to commit her crimes, could really work.

Be the first to review “The Wolf, Seductive Burglar by A.S. Peavey” Cancel reply