You are here: Products The Wolf Escapes by A.S. Peavey 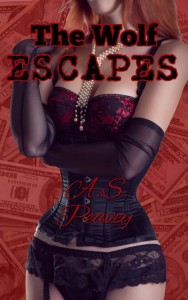 The Wolf Escapes by A.S. Peavey

Charlotte would like to just be a normal woman, overlooked by the authorities, making the most out of her life, roaming across the world as she pleases. She visits a city custom built for idle billionaires to avoid crime, seeking both profit and pleasure among their ranks.

But when she crosses paths with the Wolf, the world’s most famous burglar, when her lover is arrested as that burglar in the middle of their intercourse, she sets out to find the truth about the thefts plaguing the city.

Charlotte believes the authorities have the wrong man. Her lover can’t be the Wolf, but the Captain of the Watch is too blind to see the truth. So Charlotte will seduce him to find out the truth, and enter whatever beds necessary to achieve her goals.

Can Charlotte solve the mystery and uncover the true Wolf before he flees with all his stolen goods? Can she save her lover, the city, all the while protecting her own secrets?

A.S. Peavey is branching out from micro caption-based Erotica (which you can check out on Tumblr), to explore the world of longer form stories and novels, and is excited by the opportunities offered to expand on stories, and grasp what tugs at the libido. Peavey lives and plays along the Rocky Mountains.

The character of the Wolf is loosely inspired by Arsene Lupin an early 19th French character who was created as a criminal answer to Sherlock Holmes. For some reason, it just made sense (to me) to have a thief combining their intellect with their sexual prowess to commit burglaries.

Be the first to review “The Wolf Escapes by A.S. Peavey” Cancel reply