You are here: Products The Witch of the Prophecy by Victoria Jayne 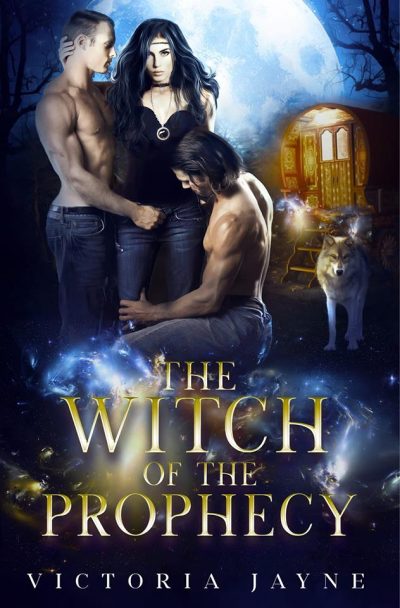 The Witch of the Prophecy by Victoria Jayne

Divina’s had it with the prophecy.

Divina’s not convinced the prophecy is about her. Her manipulative vampire ex-boyfriend, Rori, is reluctant to give up his love for her to pursue the throne. Meanwhile, the wolf shifter meant to claim Divina doesn’t believe in the prophecy. However, he does believe Divina is his mate.

With the pressures of the prophecy and the most powerful coven in the present-day United States, Divina is left to choose between complying with the prophecy and mating with Aric—or leaving it all behind to allow the catastrophic possibility of supernatural beings getting exposed to humans.

Growing up on the Jersey Shore, Victoria was an insatiable reader. She adored getting lost in the worlds others created for her. During her early teen years, she enjoyed the works of R.L. Stein and S.E. Hinton. As she got older, she drifted into the worlds provided for her by Anne Rice, Suzanne Wright, J.D. Tyler, Joanna Wylde, Cherise Sinclair, Dianne Duvall, and Elisabeth Naughton, to name a few. These writers spawned her love affair with both the romance genre and the world of the supernatural.

Victoria started writing as a hobby while still in high school. Now her days are spent writing, enjoying time with her husband, and her two children. She still lives in New Jersey. She is a member of the Romance Writers of America and New Jersey Romance Writers. Victoria is a New Jersey Devils Hockey fan, an avid SecondLife Roleplayer, and a Netflix binge watcher.

I started writing at the tender age of sixteen. I wrote short stories and novellas. I finished some, abandoned others. I didn't get serious about writing until maybe 2009. Before that I just sort of wrote for me and never did anything with my stories.

The Witch of the Prophecy was inspired by all the books about shifters I've read and all the vampire shows and movies I've watched. I found that I binged on these character types and this particular theme, so I figured why not try writing it yourself. I loved Divina, Aric, and Rori. They were funny, charming, and close to my heart. Their twisted story needed to be told, and I am in the process of doing so.

The With of the Prophecy is the first of three books about these three characters and how they navigate the prophecy.

The fruity fragrance of the potted primrose tangled with the hints of sweat and fresh sex. The pillows and duvet coiled into a heap on the bed. However, the couple responsible for the disheveled state was no longer there.

The glow from the moon shone through the large window, causing her ebony waves to shimmer, while he stroked his pale, slender fingers through her hair. He couldn’t recall another time in his life when he had felt as content as he did at that moment. His whole world was in this oversized chair.

Her plump body curved in just the right places; her olive-toned, bare form lounged across his much paler lap. As she flipped through the leather-bound text, Rori leaned in, burying his nose in her hair and inhaling deeply. He savored the raw scent of the woman who had captured his formerly still heart. He couldn’t help but smile.

Turning the page of the old leather-bound book, she read while resting her head against his chest. She was warmer than he was. She had far more life than he did. Perhaps his desire to possess her was something other than infatuation.
Pressing his lips to the top of her head, he didn’t care the cause; he only wished to have her.

Having lost the concept of time long ago, he found it worse when with her. When she shifted her position even slightly, the stimulus stirred his hunger for her again.

"I can't believe this stuff is so hidden." She broke through his thoughts.

He smiled. There was much about the world he wanted to show Divina before reality set in.

"Humans would not be able to handle such information." He stroked her arm with his fingertips. "Or perhaps I should say, they didn't, so we had to take it away and hide. The world would be a much more violent place if humans knew."

With a furrowed brow, she turned her glacier-colored eyes that burned his soul, toward him. "You trust me?"

"You're not fully human," he reminded her, while playfully booping her nose before giving her a soft kiss on the forehead.
Her innocence drew him in like ants to sugar. He cherished her. These intimate moments with her were more valuable to him than any jewel or treasure.

"So you keep saying," she grumbled, and once more shifted her hips, eliciting a groan from him.

He wondered if she knew how those full hips affected him.

Her smirk told him all he needed to know about that.

"In all my years, I have yet to be wrong," he whispered in her ear.

Rolling her eyes before turning them back to the book, she sighed.

"I'm not sure I can handle the responsibility," she admitted.

He loved her for it and hated himself for what he had to do with it.

Closing his own eyes, he took in a deep breath of her beautiful scent. Relishing the moment, he pushed the future from his mind.

In the end, the right now, would be all he had. There was no need to rush it. Right now could end at any moment, and he’d only have the memory to comfort him.

"You are so much stronger than you know, Divina. I will show you," he said.

Those wide, innocent blue eyes pinned him once more. He hated the Ember Witches at that moment. He hated prophecies. He hated the world for what it was making him do.

"You've shown me so much already," she said with wonder in her eyes.

He forced a smile on his face. "There is so much more."

Rori awoke from his daytime slumber with longing in his heart. Sometimes memories were the worst form of torture. When he let her go, he’d made peace with not having Divina.

Forced to walk away from her, avoiding her for three years, had helped in achieving that peace. With the prophecy set in motion, he no longer had that luxury. They sent him back to her.