You are here: Products The Witch of Rosemary Lane by Elena Nix 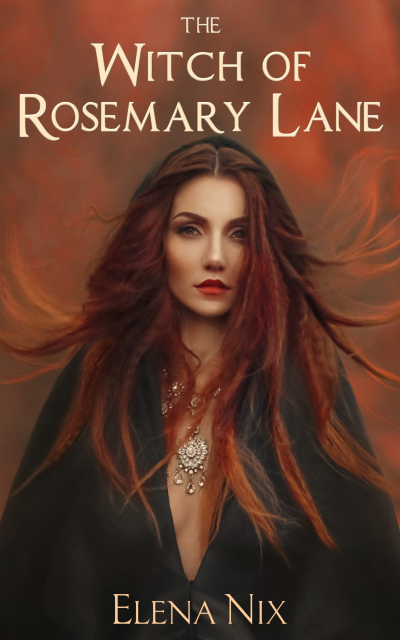 The Witch of Rosemary Lane by Elena Nix

Connor Dawson has fallen for a smoking-hot crazy cat lady who just might be a witch. Felina Desilva is everything Connor ever wanted in a woman, but she may be too good to be true. After she entices him to dinner, his dreams are filled with dark fantasies, and she’s willing to fulfill them all. Despite being warned that Felina is dangerous and discovering that she’s been connected with one man’s mysterious disappearance, Connor finds it all too easy to spend more and more time with Felina and her strangely intelligent black cat. When one of Felina’s neighbors tries to poison the cats that roam her property, Connor investigates, only to discover that the neighbor has been murdered with the same poison. When he’s questioned by police, he has to decide how much to tell them about Felina. Does he have a future with her, or has lust been blinding him to her true nature?

The WItch of Rosemary Lane was inspired by the beautiful autumn weather, a perpetually dirty mind, and the question, "What is a witch?"

They stood side by side at the porch rail. The light of the sun was long gone, but the stars were bright. Crickets layered chirping melodies over each other’s songs and a barred owl called in the distance. The night was pleasantly cool, but Connor worried that Felina might get cold in her sheer dress.
All through dinner, he had been trying not to think about her dress, or more accurately, what her dress was only partially concealing. If not for her long hair falling over her breasts, he was sure he would have been able to make out the darkened circles of her aureoles. He kept catching himself watching for a glimpse of an outlined nipple when she moved, but her hair had stayed stubbornly in place.
Now that she was standing within arm’s reach, he wanted badly to make a move. He hesitated only because she had been neither coy nor flirtatious over dinner. He was enjoying her company and didn’t want to ruin anything by being presumptuous. In the end, though, desire won out. He slipped an arm around her back and molded a hand to the curve of her waist. To his delight, she tilted her head to rest it against his shoulder.
“What are you thinking about?” she asked after a while.
He turned to look at her. Her face was pale and serene in the starlight. He raised a hand to her cheek and leaned close. “This.”
He tilted her face up toward his and kissed her. The soft fullness of her lips yielded easily to his. Her fingers curled around his arm as his hand settled on the small of her back, pulling her body firmly against his. He deepened the kiss. Her soft moans were driving him crazy and he couldn’t get enough of her mouth. As his tongue slipped in to probe her mouth, her hips shifted forward. She made little hungry sounds as she sucked at his tongue.
The eagerness of her response was beyond anything he had anticipated and he wanted more. He drew back, breaking the kiss. She looked up at him. Her parted lips were moist and swollen from his kisses. Her gaze dropped from his eyes to his mouth and the pink tip of her tongue flicked across her lower lip.
“Felina?”
“Hmmm?"
“Take me to your bedroom.”
Without a word, she reached for his hand and led him back inside, through the house, up the stairs, and down a hallway. At the end of the hall, she dropped his hand and disappeared into a dark room. He heard a click and the room lit up with the soft glow from a lamp on a bedside table.
Felina stood beside the bed with the light of the lamp behind her setting her hair aglow. The lower curves of her breasts were visible through her dress, and he could see a hint of darker color where her hardened nipples pushed against the fabric. Further down, he saw the indent of her belly button and then the deeply shadowed triangle between her thighs. If she was wearing panties, he saw no evidence of them. It was a beautiful dress, but he wanted to rip it off of her.
Joining her beside the bed, he cupped her cheek and ran the pad of his thumb back and forth over her lower lip.
“Kiss me?” she asked.
He pulled her to him and kissed her. Her arms came up to circle his neck as his hands roamed her back and sides. The tip of her tongue played teasingly against his lips until he tilted her head back and captured her mouth in a deep, hungry kiss that left her breathless. He found her dress’s zipper and eased it down. She shivered lightly as he ran his hand over her bare back.
“Take your dress off. Let me look at you.”