You are here: Products The Wife Game / The Face Of Love by Curt Donovan 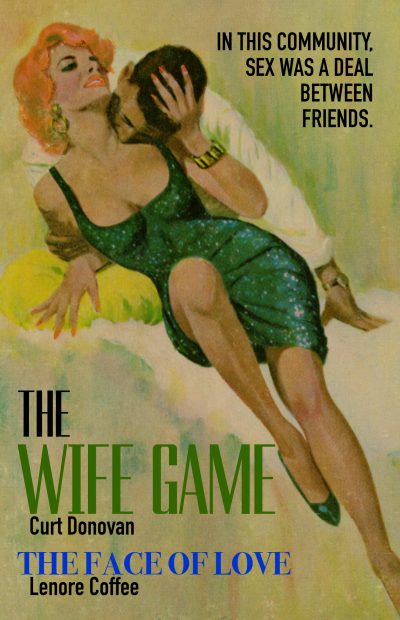 The Wife Game / The Face Of Love by Curt Donovan

A is for Adultery!

THE WIFE GAME: Here is the strange tale of how one sex-driven wife came to upset a whole community! If you were a prude, Ann’s parties were no place for you. And Dave, when he first came to town, was a prude, thinking, “What have any of these other wives got that my own beautiful wife doesn’t have?”
But he soon found out that a passionate partner can deliver a lot more voltage than just a beautiful one. Besides, it was good business to have pleasure with these girls . . . they influenced their important husbands so much!

THE FACE OF LOVE: The Macdonalds and the Matthews, two happily married couples, had been friends for years—exchanging intimacies and trusts. Of course, they liked to kid around, and once or twice the fun did get a bit out of hand. Still, it all seemed harmless, and they were certain it always would be. Then suddenly, without warning, their innocent friendship shattered into a shocking four-cornered affair. And by the time they tried to pick up the pieces, each knew it was already very late.