You are here: Products The Widow and the Rock Star by J. Thomas-Like 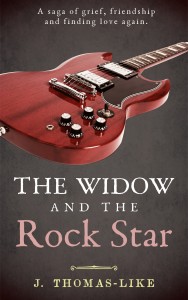 The Widow and the Rock Star by J. Thomas-Like

Vivienne Stark’s book about life as a war widow is a smash hit, but when someone drains the account for her fallen soldiers’ charity, she heads to California to try to recoup what was lost. While on a whirlwind interview tour, her best friend, Pepper, introduces her to the world-famous and woman-weary rock legend Will Foster. The electricity between Will and Vivienne is unmistakable. But is it a case of opposites attract, or can the widow and the rock star find a way to make it work?

J. Thomas-Like is a writer born and raised in Michigan. She began writing at an early age, hoping to do more with it. Unfortunately, life got in the way and it has taken her 40 years to get to a point where she can put her ideas and thoughts onto the page in a consistent and fulfilling way. She lives with her doting husband, brilliant son, a passel of cats, and a dog. She is happy to be making her dreams come true, one story at a time.

It was simply a dream about meeting a celebrity I find extraordinarily sexy. My imagination went wild from there.

And now I was in the arms of a man seven years younger than me, sexier than hell, and he was kissing me! And it was exciting!
His one arm snaked around me, and a feeling of warmth and safety mingled with my racing hormones. His tongue touched my lips and I steeled myself not to freak out. A little voice popped into my head screaming, What the hell are you doing? But I managed to ignore it. I couldn’t believe I was doing what I was doing, but some baser instinct took over.
Somehow we got up from the couch while still kissing. Some way, we made it up the stairs to a door. My arms were curled around Will’s neck and my hands were buried in his hair as he reached behind us to open it. My neck was stretched to the limit so I could keep my mouth on his and yet we glided smoothly inside. He used his foot to nudge it closed, never once breaking the contact between us.
He pressed up against me, pinning my hands above my head, lacing his fingers with mine, against the door. We stayed like that for a long time, just kissing.
“I must be drunk,” I half giggled, half murmured, trying to catch my breath.
“No, you aren’t.”
“Then you’re drunk.”
“No, I’m not.”
I wanted more and I untangled my fingers from his to get my hands free. When he let go and I reached for his shirt, he said “no” against my lips. Pulling away from me, he whispered into my ear, “Let me. This is all about you.”
“Me?”
“Yes.” He kissed me again, slowly. “Stop thinking. Just feel.”
“But—”
“No buts, shh.”
After that, the way he kissed me, the way he undressed me, the way he led me to his bed, the things we did when we got there, it was all just one long stream of consciousness because I listened. I let go. I was utterly overwhelmed by the feel and smell and taste of his mouth and hands and skin on mine.
It became clear that all the desire inside me had never disappeared. I never got rid of it or expunged it, no matter how much I thought I had. It lay dormant in me like a virus waiting for the right moment to come alive.
It was as though one small vein of lava was still inside my heart somewhere and his kisses were a warm breeze blowing on it, making it glow bright orange. With each new touch and stroke, the lava spread farther through my veins and my body was heated through until it rose to the surface, pouring out of my skin. I stopped thinking and analyzing and trying to give a response that I thought he expected. The things he did to my body and the way his hands and tongue moved over every inch of it made me feel as though he was playing me like one of his guitars. All of my reactions to every kiss, every stroke, were as spontaneous and unplanned as breathing.
He was skillful at anticipating what would feel good and what I would like, but my last experience was so far in the past, it couldn’t have been too difficult. Everything seemed to make me groan, sometimes in surprise and other times with simple pleasure. When I didn’t respond the way he expected, Will made me tell him what I was feeling and what I needed. When words failed me, he used my own hands against me to show him the way.
He memorized everything that made me breathe faster and forgot anything that didn’t.
Will found a path and followed it without hesitation to the center of my sexual core, allowing me to selfishly accept everything happening without worrying about giving in return. Again and again, he took me to places inside myself I hadn’t been in decades and to new places I never knew were there.

Be the first to review “The Widow and the Rock Star by J. Thomas-Like” Cancel reply