You are here: Products The Wicked Sister by Virginia Barlow 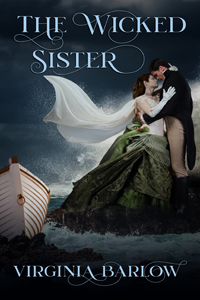 The Wicked Sister by Virginia Barlow

With her stepfather’s sudden death, Lady Anastasia Covington goes from living a privileged lifestyle to selling vegetables in the village marketplace in the blink of an eye. Alone and at the mercy of her nefarious stepsister, she yearns for love and acceptance.
Disguised as a simple soldier, Prince Percival catches a dark-haired emerald-eyed beauty in his arms. He is bewitched. The more he sees her, the more intrigued he is by her contradictions.
Forced to keep his identity a secret, he must somehow convince Lady Anastasia he is the right man for her.
But time is running out. Lady Anastasia’s mother i determined to find a proper suitor and see her wed-and someone wants her dead.
This is a classic fairy tale with a twist!

I like to read romance. it has always been my favorite genre. I started by sneaking my mom's books and reading them when no one was watching. My parents moved a lot as I was growing up. I was always the new kid. I think the books helped me feel like I was part of something. They were always there. Just like an old friend. I toyed with the idea of writing years ago, when my children were all young. I just did not have the time. I had several boys and they requited a lot of monitoring. Boys will be boys, as they say. I have a new book due out later this year.

What inspired me to write this book? My husband and I were talking one day about families and how things are often different than they appear. There are times when one family member is going through a situation that no one else understands. In fact, the other family members may not be aware the situation exists. We started tossing ideas around about different established stories and how they might have been different. The idea came to twist this fairy tale up.