You are here: Products The Warriors of Rykan by Debbie J Burton 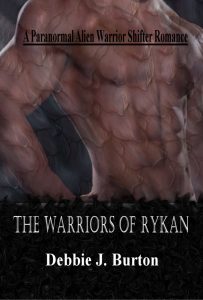 The Warriors of Rykan by Debbie J Burton

The warriors of Rykan are on a mission to find compatible mates. They travel far and finally land on a planet called Earth. The women there are most beautiful, and are compatible as mates for the warriors. Quirth, the commander of the star ship Emerel, stops a Earth woman from being raped and killed. He brings her back to the ship and wants her for his mate.

Kemper and Jard, Quirths second and third in charge also find their mates, but have to kidnap them, to get them on their ship.

My name is Debbie J. Burton. I live in Southwest Iowa and have enjoyed reading about shifters for many years now. When I retired, I decided to try my hand at writing them. It has become a passion. I love feedback…good and bad. It helps me become a better writer. If you enjoy my books, please leave feedback. Thanks

I have always loved reading shifter books. Had to try my hand at writing them!