You are here: Products The Viscount’s Volatile Vixen by L. L. Neal 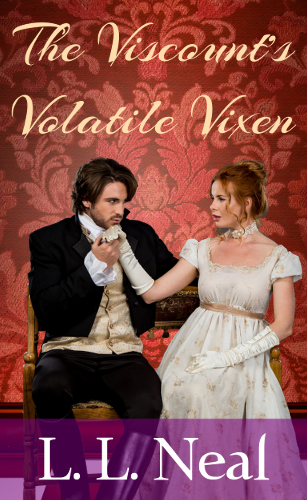 He loves her, she hates him. Will true love prevail?

Will the events of the Season make a difference? Perhaps the bawdy seductions at the notorious Vampire Ball will help Lord Marcus Parkhurst find the key to Lady Lillly’s heart.

L.L. Neal grew up reading romances and particularly loved Regency romances. She took up writing when the romances she was reading started to blur together and to look the same. Her first set of Regency romances, The Tumbling Green romances, are set in Regency times but with strong-willed heroines.

L.L. Neal comes from a family of eight and grew up with five sisters, giving her insights into how siblings do—and don’t—get along. L.L. Neal currently lives with her husband of seventeen years, two dogs, and two cats. In her spare time she's crafty: sewing pillowcases for charity, knitting wool socks for family, crocheting lap throws, and quilting.

Be the first to review “The Viscount’s Volatile Vixen by L. L. Neal” Cancel reply