You are here: Products The Virgin and the Vixen by Oz Carter 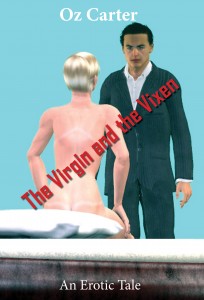 The Virgin and the Vixen by Oz Carter

Socially awkward Clark has never managed to get lucky, and he seems doomed to remain a virgin. Then, in a chance encounter, he meets the beautiful and exotic Maritza, who has a soft spot in her heart–and in her bed–for virgins. Maritza says their indulgence can only be temporary, but Clark is determined to change her mind.

Oz Carter lives in New York City, where he worked for many years in the publishing industry. He likes to write naughty tales of naughty people doing naughty things.

The book was inspired by some of my own unpleasant dating experiences when I was young.

Clark carefully inspected his face in the men’s room mirror. No pimples on his nose or missed hairs from his morning shave. No dry skin on his lips. No grunge in the corners of his eyes. He combed his hair. No flakes on his shoulders. He inspected his teeth. No food particles. He sprayed a shot of breath freshener into his mouth.
Now he was ready to talk to Polly, the new designer. All the other young, single women in the company, for one reason or another, had pegged him as a loser. They liked him okay; he was a nice guy and he was smart. They didn’t even mind if he noticed one of them lifting a skirt to scratch a thigh or if he got an eyeful if one of them leaned over a little too far while wearing a top with a low-cut neckline. But none of them would go out with him, not even for lunch. And they made fun of the way he became google-eyed at the sight of a pretty girl.
Maybe he could get to Polly before she was influenced by the prejudices of the other women. She was just out of college and only a few days on the job. She was petit and pretty, with a ponytail and a delightful smile. She was friendly but hadn’t had a chance to meet people in New York, which was to his advantage.
Today was the perfect day to ask Polly out because it was Friday and they didn’t have to work the next day. They could stay out as late as they wanted and get to know each other. This time he was determined not to become tongue-tied and flustered like he’d done since high school whenever he tried to become acquainted with a girl.
He gave himself one last inspection, then left the men’s room and confidently sauntered downstairs to the Design Department. But Polly wasn’t at her workstation. His game plan was thrown off. What should he do? Wait or come back later? He’d really look like a dork, hanging around Polly’s empty workstation.
“Uh—you know when Polly’s coming back?” He asked Liza, the curvy girl who sat behind Polly.
“She went to the archives room to look at some old concepts,” Liza replied. “She should be back soon.” With a bemused smirk, she added, “You gonna ask her out?”
Janet, the leggy girl at the workstation in front of Polly’s, was also smirking. She and Liza knew that Clark, who worked in Accounts Payable, had no work-related reason to talk to Polly. Each of them had also been asked out by him.
He blushed with embarrassment and avoided their direct gazes.
“Good luck,” Liza offered as Clark was leaving.
“Maybe you’ll float her boat,” Janet commented.
He could hear the two of them giggling until he was out of earshot.
The archives room was on the floor below. It was where the company stored information that predated computerized databases. Hardly anyone ever went down there. It was the perfect place to have a private conversation with Polly.
Clark hurried down the stairwell. He stopped on the landing when he saw Polly through the glass in the access door. She was standing outside the archives room as if waiting for someone. As he collected himself after the momentary setback, Neil, the tall, handsome media buyer stepped off the elevator. Neil was everything Clark was not. He was a real alpha male, a self-assured, dominant, take-charge guy. Every unmarried woman and gay man in the company swooned over him.
Neil used his card key to unlock the door to the archives room and ushered Polly inside. The sight knocked the wind out of Clark. He had to sit down on the staircase. All the fun he’d envisioned having while introducing Polly to New York was now just a shattered daydream. He wouldn’t be eating at ethnic restaurants in the Village with her. He wouldn’t be visiting SoHo art galleries with her. He wouldn’t be seeing off-Broadway plays with her.
He’d been so certain this time. But he’d been certain all the other times. Like in high school, when his prom date left with another guy; in college, when the sorority girl he thought was romantically interested in him turned out to be doing her mandatory “good deed” by helping someone who was socially inept; in graduate school, when a girl would let him buy her dinners but insisted he bring her home by 10:00 pm—so she could go out to singles’ bars to look for Mr. Right; and the girl he’d met through a dating website in New York, who directed all the resentment for the mistreatment she’d received from other guys at him. Thus, Clark was still a virgin at twenty seven.