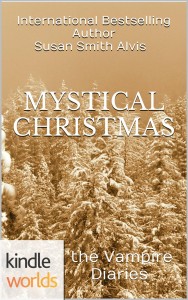 Klaus and Stefan are tearing through the South collecting hybrids and leaving a trail of dead bodies behind them. Unable to reach Stefan any other way, Elena devises a holiday plan to lure Stefan back home where he belongs.

Damon thinks Elena is wasting her time and fears the worst. He and Stefan no longer celebrate Christmas, but if Klaus approves Elena’s request, Damon will support her by giving her what she wants—a traditional Christmas.

What Elena wants and what she gets are two different vampires altogether. Elena approaches Klaus and asks for Stefan’s release, even if it’s only for one Christmas weekend. Klaus agrees, but his terms and conditions are nonnegotiable.

Soon, Elena is holed up in a snow-covered chalet with the Salvatore brothers and Klaus, an original vampire with an unusual agenda. And he’s gone to great lengths to find out who Elena really loves.

The author resides in East Tennessee but spends most of her time in Virginia and Connecticut where her granddoll resides. Susan loves hearing from her readers and can always squeeze in another ghostwriting assignment, if the topic is interesting and the contract allows her to stay in the shadows so she can do what she loves most–write.

Mystical Christmas, while in its creation, was a true holiday for me as a writer. So often I write like mad from morning until night and rarely look up except to take a walk or maybe throw together a sandwich or raid the yogurt drawer. Gaining the opportunity to leave my worlds and visit another creative world was an unexpected treat. I hope readers will embrace Kindle Worlds, the authors writing for Kindle Worlds, and the producers, writers, and creative forces behind all Kindle World offerings. Like me, so many authors out there have truly enjoyed writing within the Kindle Worlds and if anything, it has given all of us an opportunity to challenge ourselves as writers by writing in another author’s established world.

Dear Diary,
I used to love mystery and danger. Like other teenage girls, I’d often imagined what it might be like to find myself in the middle of a catastrophe, stuck between two great forces—like good and evil—only far more dramatic.
At that time, Stefan and Damon Salvatore didn’t exist in my world. The world—at least the one I lived in—was less complicated. My days then were in black and white, with an occasional burst of color and flare, compliments of Caroline.
Then the Salvatore brothers entered my life and everything changed. I soon learned there wasn’t a line of division down the middle with these two. And after I met Damon and Stefan, my former life faded to black and now the past seems surreal.
I look down at the Salvatore driveway, now lined with packed snow and jagged tracks and wonder how I could’ve been so naïve. Who was that young girl who compartmentalized thoughts, people, places and things? Why didn’t she take the time to see the bigger picture with more multidimensional aspects, more depth?
As I think about the coming hours with a mix of dread and a dash of excitement, I now know a well-rounded life takes a triangle’s shape. Life isn’t clean and tidy with a circular rotation driven by nature to lead us all back to where we started. It’s not boxed up all nice and neat with defined planes and specific instructions to make our days easier. How boring would that be? Then again, after barely surviving these last few months, boring sounds like a little slice of heaven.
It’s the most wonderful time of year or it is for those who believe in the two-sided world, the world beyond this window, the one where others grade their mere existence by good or evil.
But there is a third entity or force. And he’s standing right behind me.