You are here: Products The Treachery: The Daemon Paranormal Romance Chronicles, Book 7 by Darla Dunbar 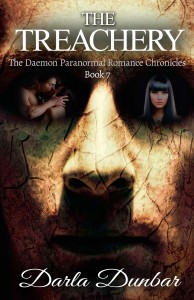 With young Juno’s love for Supay discovered, Juno rushes to conceal her lover’s name. Unwilling to sacrifice Supay to her mother’s wrath—or the vengeful nature of fellow sirens—Juno does the only thing that she can to save her love… lie.

The decision to hide the name of her true lover leads to unexpected and unfortunate consequences. At the heart of the matter is one question: To what lengths will Juno go to secure the safety of Supay and her unborn child? As this spicy romance heats up, the only certainty is that nothing will ever be the same again.

I love to combine the paranormal with romance and erotica and writing about mystical and powerful males and their female partners. I want my readers to take a romantic hot mysterious journey through my characters.

Be the first to review “The Treachery: The Daemon Paranormal Romance Chronicles, Book 7 by Darla Dunbar” Cancel reply