You are here: Products The Traveller by Garrett Addison 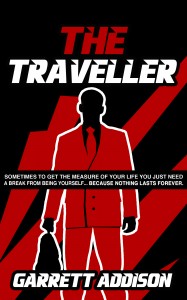 The Traveller by Garrett Addison

Sometimes to get the measure of your life you just need a break from being yourself.

A family man struggling in his pursuit of a work/life balance embarks on yet another trip at the whims of his tyrannical bitch of a boss. But on this trip he is a world apart from his usual self. Suddenly confident, capable and unafraid of his manager, reclaiming his life becomes less about corporate advancement and satisfying his ego than outright revenge on his boss. With nothing but success in his wake and seemingly limitless potential at his disposal, being coerced to work with his nemesis in a remote corner of the world provides the opportunity for not just a confrontation, but a final solution to what he sees as the bane of his life. Succeed or fail, either way this trip will be the making of him or the end of him.

Sometimes to get the measure of your life you just need a break from being yourself… because nothing lasts forever.

Garrett is forty something, Australian, and also a geek, husband, father and novelist. He grew up in Perth, Western Australia, and has been lucky enough to live in or visit most of Australia and much of the world. He now lives in Melbourne with his family. Not averse to change, thus far, he has been an Army officer, software consultant and author. But this is just the beginning. The Traveller is his second novel.