You are here: Products The Training of a Virgin Submissive by Tia Rain 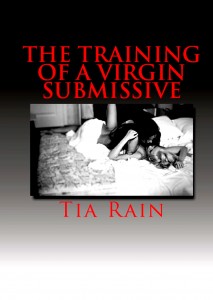 The Training of a Virgin Submissive by Tia Rain

Be careful whom you share your sex dreams with…

“Do you think you deserve her?” Her master asked as he sat hidden in the shadow of the large room, his eyes gazing intensely over her body. Taking in the sexy attributes of the pale skinned, blood red haired Goth dressed in only leather-spiked collar around her neck, the rest of her body dressed in a color array of sexual explicit tattoos draped across her ass, legs, inner thigh and lower hips.
“I… I…,” Piper gasped, gazing into the shadows, making sure not to make direct contact with the eyes of her master as she thought of the correct words to say. “I… you, master, you promised I could have her once I got her here,” she whimpered airlessly, only to see his eyes narrow, becoming more sinister, more intense.
“I know what I said,” he growled, flashing a studded leather whip across her bare ass, the air around her smacking hard to the violent lash. Forcing the young slave, to whimper roughly before feeling the lash once more slapping against her velvet flesh, watching as her flesh turned a great crimson hue, the firm round of her cheek welting to the heavy lash, “I know what I promised to my sexy slave but I asked if you think you deserve to her?” he said darkly.
“I… I don’t deserve,” she paused, her head sliding submissively down between her shoulders, “I don’t deserve anything until master says I do, my pleasure is yours to control master… yours to own,” Piper panted, eyes looking away from him as she heard him walking towards her.
“It’s almost time master?” Piper hissed like a playful student in heat, standing up on her knees, making sure to remain the ever submissive, just as she liked it whenever they were together.
“I know that. I asked if you think that you deserve to fuck her, to devour her pussy, to feast upon her and take of her innocents.” He asked darkly as Piper thought for a moment on how to respond to his question. “I don’t deserve anything master. My pleasure is at your whim.” She repeated.
“Good… very Good my peach,” the man partially cloaked in the darkness smirked. “That was the answer I wanted to hear.” He hissed, walking from the darkened corner, before hurling the bound and gagged, blond woman down against the hard wooden flooring.
“How about you slave?” he asked the bound and gagged blond, who was unable to speak out due to her bindings. “Do you see a reason why I shouldn’t let my pet feast upon you?” he asked sadistically.
“Mmm, mmmm,” the tiny, young woman mumbled through her restraints, unable to speak out, unable to agree or disagree with what was being said about her… to her or for her.
“Mmmm, I thought not,” he smirked darkly before bending down over Piper’s body, the tip of his hardened cock pressing down between the crack of her ass, finding a home between the heated inferno of her tight cheeks.